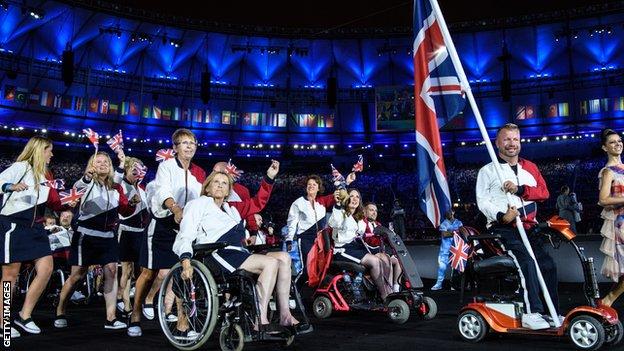 The Games, which were scheduled to start this week, are now due to begin on 24 August 2021 in Japan.

But financial fears as a result of the coronavirus pandemic have cast a cloud over the Para-sport movement.

“We want to avoid a situation where a nation cannot compete because of finances,” Parsons told BBC Sport.

“We are developing strategies and plans with governments, commercial partners and the Tokyo Organising Committee and are constantly in contact with the various National Paralympic Committees (NPCs).

“I think the more sophisticated NPCs are the ones who are struggling most because they have different revenue streams through commercial and broadcasting which have been affected.

“The smaller NPCs only rely on government support and they have more stability when it comes to financial resources coming in.”

Organisers expect around 4,400 athletes from around 170 nations to compete in 539 events across 22 sports, including Para-badminton and Para-taekwondo for the first time, from 24 August to 5 September 2021.

With competitions on hold after the Games were postponed in March, qualification criteria had to be revised to protect athletes who had already secured individual or nation-specific slots and set out the plan for other sports and athletes to qualify for the Games.

However, the lack of competition means that classification opportunities are also limited, jeopardising the IPC’s aim of all assessments being done prior to a Paralympics.

“Our biggest challenge is the uncertainty around the Games, if they go ahead or not, and when we can have competitions back,” adds Parsons.

“It is affecting the qualification processes and the classification opportunities we can offer to athletes.

“If our first competitions are the Games itself, that is completely different for qualification and classification.

“Although athletes may not have qualification opportunities, the universality of the Games is non-negotiable and we have mechanisms where we can invite athletes at the right level to take part without qualification.”

In June, Tokyo’s governor Yuriko Koike said the Olympic and Paralympic Games would be ‘scaled back’, leading to concerns, especially among Para-athletes, about what that would mean.

It brought back memories of the financial crisis that hit the Rio Paralympics just days before the opening ceremony four years ago when the Brazilian organising committee ran out of money and the Games was in serious jeopardy.

But while costs will be reduced this time, Parsons has vowed that athletes will not be affected.

“We are looking to reduce costs and have agreed more than 200 measures to do that,” he explained.

“But the fundamental experience will not affect athletes – what they need to compete in terms of accommodation, transport and venues.

“We are helping Tokyo to reduce costs but this will also be a good exercise for the future which might make more cities interested in hosting a Games.”

What about the British team?

ParalympicsGB are planning for a team of around 250 for Tokyo but no athletes have yet been confirmed.

Penny Briscoe, who will lead the team as the Chef de Mission has praised the attitudes and approach of the British Para-sport community over the last, difficult six months.

“What stands out for me when it comes to Para-athletes is their resilience, their determination and their ability to find ways to do things and that has been characteristic of lockdown in the UK,” she told BBC Sport.

“The approach was to ensure athletes and their families were safe and then set them up with the best home-based training, because we had no idea how long lockdown would be and the impact it would have.

“We have had regular contact with the sport team leaders who have done an incredible job to keep athletes fit and well and remaining engaged and supported, albeit in a remote fashion, and the team spirit has remained high.”

About 90% of Para-sports in Britain now have athletes back in training venues with rigorous safety and social distancing measures in place as they work towards the Games.

It is a relief to the likes of swimmer Ollie Hynd who, like the rest of the Para-swimming squad, found himself confined to largely land-based training.

“Lockdown and the pools closing had a massive effect on swimmers,” he said.

“I was out of the water for four months so to have that feeling again and get my shoulders moving will be a slow process.

Hynd, like his team-mates, is waiting to find out when his first competition will be but Briscoe is sounding a note of caution.

“That is where the national and international systems need to work together to try to mitigate the risks around Covid and ensure we can start to open those international corridors to create competition.

“We want to ensure that when the Games do take place that best athletes are there because the medics and scientists have done what they can, whether that is in terms of a vaccine or creating bio-secure environments where athletes can compete safely and securely.”

While celebrations in Tokyo to mark a year to go until the Games are low-key, the IPC has partnered with streaming service Netflix to launch Rising Phoenix, a powerful documentary about the history of the Games, from the impact of the founder of the movement Dr Ludwig Guttman to the present day.

The documentary features interviews with top athletes including British amputee sprinter Jonnie Peacock, Italian wheelchair fencer Bebe Vio who aged 11 had both her legs amputated below the knee and both arms from the forearm after meningitis.

It also includes French sprinter Jean-Baptiste Alaize whose right leg was amputated after being attacked during an armed conflict in his native Burundi and wheelchair racer Tatiana McFadden who was adopted aged six from a Russian orphanage by an American woman.

“It’s quite amazing how many adoption stories there were in this film so it does have the power of adoption in there and I cried watching myself.

“You really feel the emotion as the athletes are talking about what sport has allowed them to become.”

Director Ian Bonhote added: “I think this film is very important to reach as many people as possible.

“We anchor the story between London 2012 and Rio 2016 because London was a great success and in 2016 there was some jeopardy. We realised when we spoke to our contributors that there is a constant theme of one good and one bad.

“London was a great success and they managed to create the visual appreciation as well as the sport. It wasn’t just something to do with disability. Rio was a step back and I think the film is there to make sure we never step back.”

Tokyo 2020: Athletics must be creative if Olympic Games do not go ahead – Lord Coe