This month sees the release of Tenet and – finally – the Mulan reboot, along with a Gloria Steinem biopic and a gothic thriller. 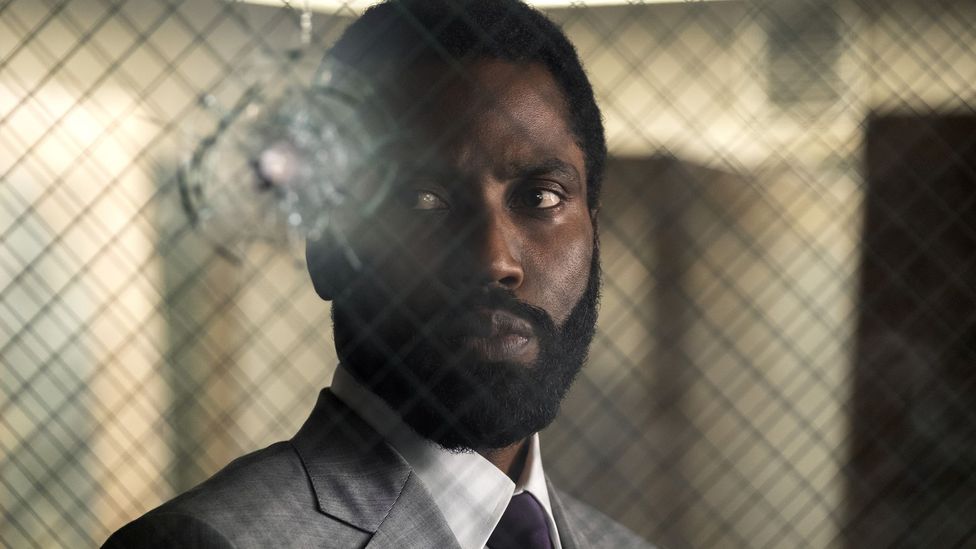 If any film is going to tempt crowds back to cinemas, it’s Christopher Nolan’s Tenet, a brain-frying science-fiction blockbuster with a high concept and a higher budget. John David Washington stars as a secret agent who learns about mysterious weapons that move backwards through time, and then dashes off on a mission to find the man responsible, a sadistic Ukrainian arms dealer played by Kenneth Branagh. Tenet is a Bond movie that squeezes Back to the Future 2 and Edge of Tomorrow into its last act. After six months with almost no new films in cinemas, it’s good to see a film so crammed with exotic locations, snazzy costumes, shoot-outs and explosions that you get six months’ worth of entertainment in two and a half hours.

On general release now, and in the US and Russia on 3 September 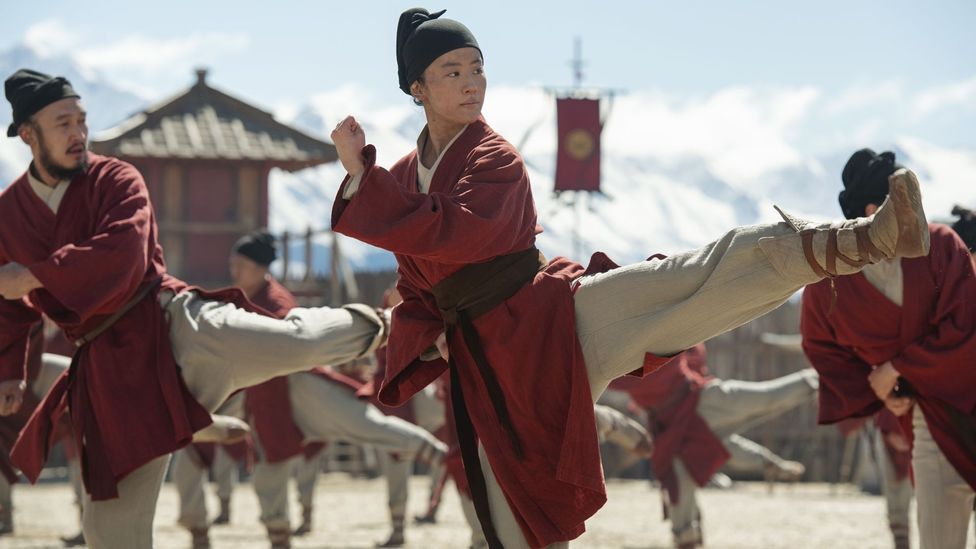 Has there ever been a longer gap between a film’s premiere and its general release? Mulan had its red-carpet gala in Los Angeles on 9 March, but then… well, we all know what happened next. Its release was postponed and postponed again, and now at last Niki Caro’s live-action remake of the 1998 cartoon is being shown on Disney Plus for a premium fee. It will go down in history as the first major film to go straight to the company’s new streaming channel, but it’s a shame that it won’t be on the big screen. Judging by the trailers, Mulan will have some huge battle scenes and spectacular mountain scenery, as a Chinese girl (Yifei Liu) disguised as a man proves herself in the emperor’s army.

On Disney+ from 4 September 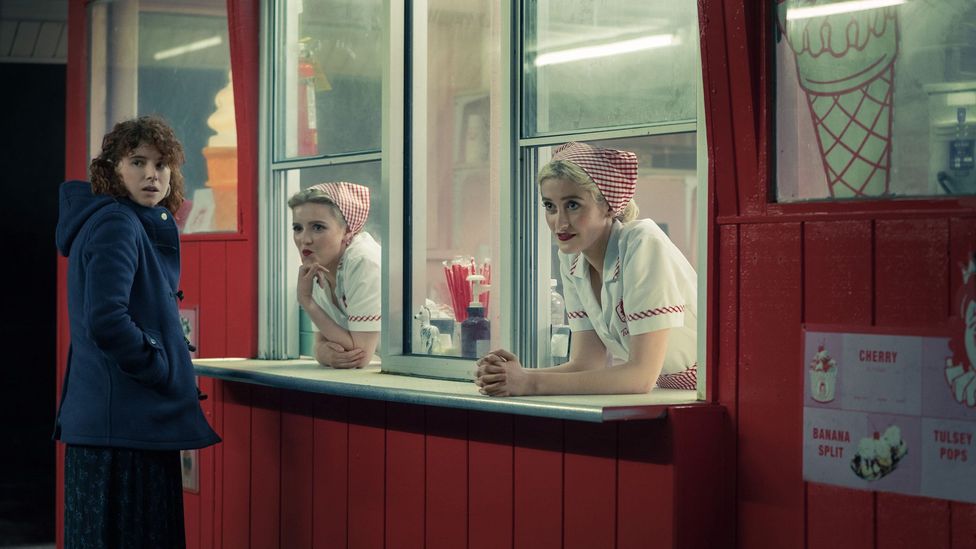 Like a dark remake of Meet The Parents, I’m Thinking of Ending Things stars Jessie Buckley as a young woman who drives with her new boyfriend (Jesse Plemons) to the farm owned by his disturbingly chipper mother (Toni Collette) and father (David Thewlis), only to find herself slipping back and forth through time and in and out of reality. Adapted from Iain Reid’s psychological horror novel, the film is scripted and directed by Charlie Kaufman, the writer of Eternal Sunshine of the Spotless Mind and Being John Malkovich, so you can expect low-key surrealism and painful existential angst. What else you can expect is a mystery, although IndieWire promises that “Kaufman’s off-kilter and more comedic vision is a study in loneliness, a break-up story, and the writer/director’s own searching journey through his career”.

On Netflix from 4 September 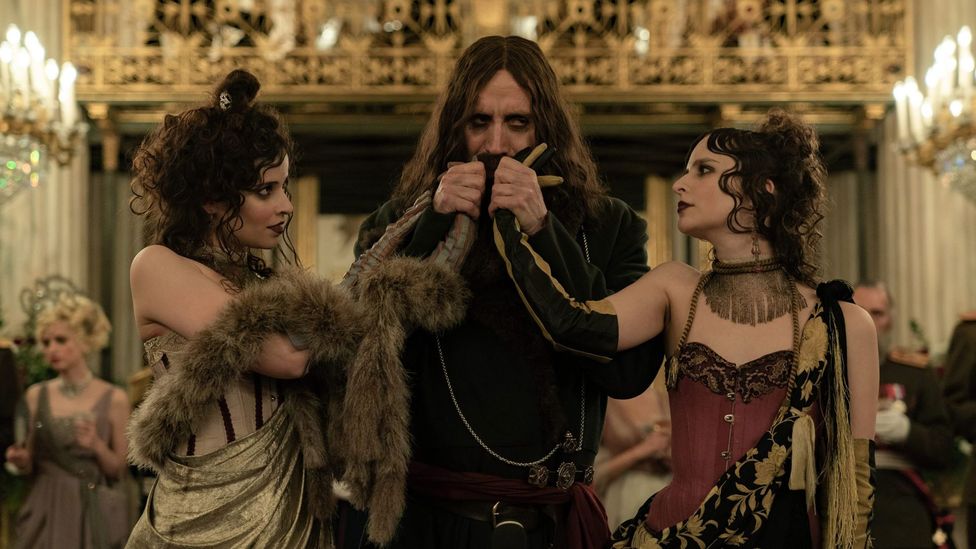 Matthew Vaughn follows his two Bond-spoofing Kingsman comedy-thrillers with a prequel set during World War One. A cabal of the world’s most heinous criminals and tyrants (including Rhys Ifans’ magnificently bearded Rasputin) is planning to profit from the global havoc, so an aristocrat (Ralph Fiennes) and his protegé (Harris Dickinson) set up their own smartly-suited intelligence agency. Considering that Fiennes played a pin-striped super-spy himself in The Avengers (the British one with Uma Thurman, not the Marvel one) as well as the head of the Secret Service in the recent Bond movies, he should know what he’s doing. Gemma Arterton, Stanley Tucci, Matthew Goode and Djimon Hounsou join him for a cavalcade of swordfights, explosions and one-liners – though not as much silliness as there is in the previous Kingsman romps. “It’s quite different tonally,” Arterton told Simon Mayo on BBC Radio 5. “There’s a real weight to it. It’s a little bit more serious in tone.” 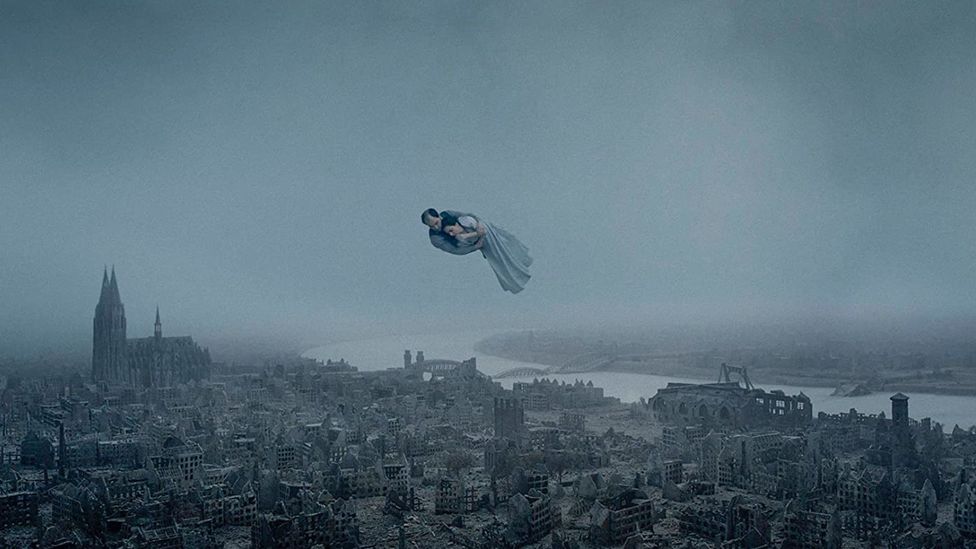 Anyone who has seen Songs from the Second Floor or You, the Living will know that Sweden’s Roy Andersson is cinema’s master of bleakly funny, absurdist, and somehow profound vignettes. His films are like compilations of depressive Monty Python sketches, in which frumpy, zombie-pale Swedes treat the most bizarre situations as if they are crushingly banal. About Endlessness is another “collection of tragicomic tableaux revealing large truths about humanity’s everyday struggle for happiness”, says David Jenkins in Little White Lies. But here Andersson “cuts through the sheen of artificiality with very real and affecting emotions, and… manages to achieve an almost Zen perfection”. 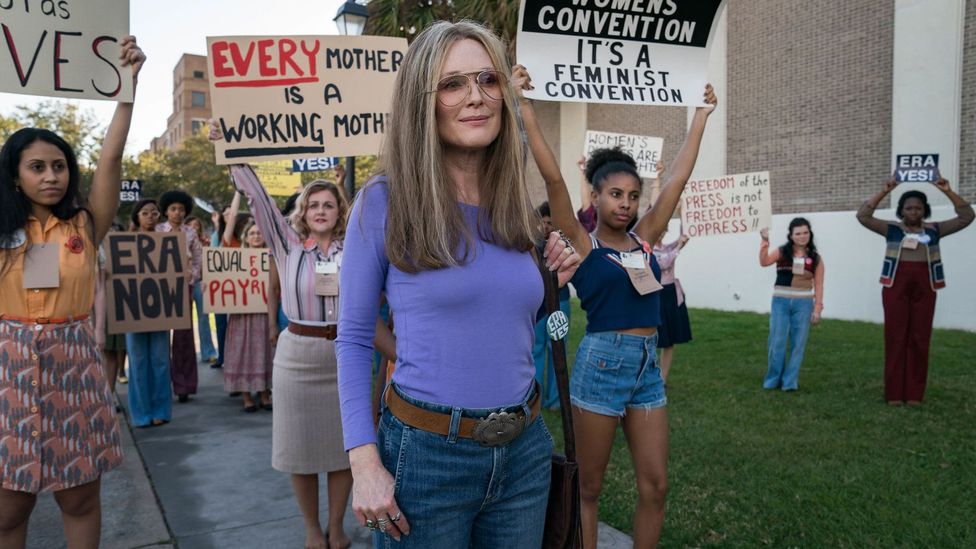 Gloria Steinem’s life and work are too much for one actress. Already this year, the trailblazing activist and journalist has been played by Rose Byrne in the Mrs America TV series. And now, in an ambitious biopic directed by Julie Taymor (Frida, Across the Universe), she is embodied at different ages by Julianne Moore, Alicia Vikander, Lulu Wilson and Ryan Kiera Armstrong. There are even fantasy sequences in which the various Glorias meet and chat about their decades of learning and campaigning. The complex result, says Tim Grierson in Screen International, is “an exceedingly thoughtful portrait” that explores both “the feminist writer’s imposing cultural status [and] her flesh-and-blood humanness”. Film trivia footnote: Steinem’s stepson is Christian Bale.

On Amazon Prime in the US and Canada from 30 September 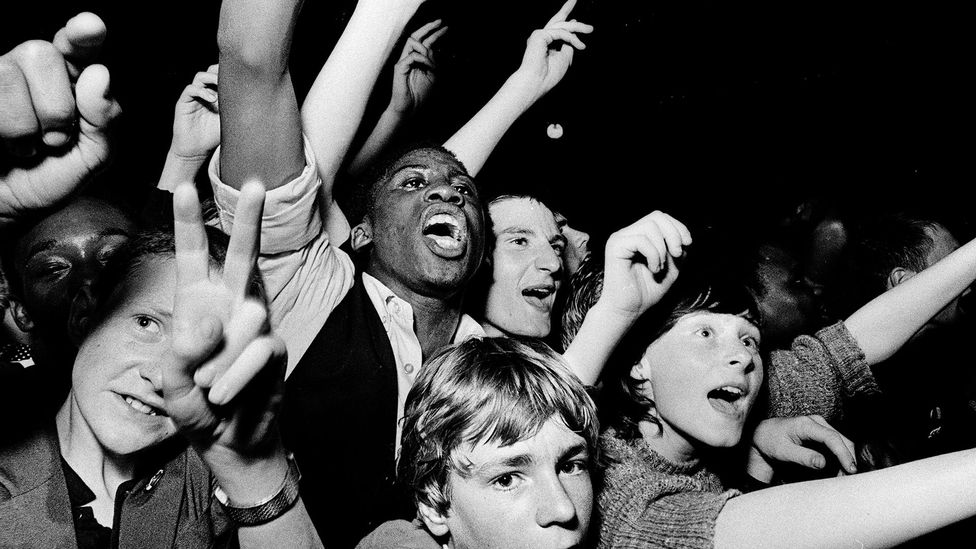 White British rock stars may have pinched their ideas from black musicians, but that didn’t stop David Bowie, Rod Stewart and Eric Clapton spouting anti-immigrant rhetoric in 1976, at a time when the fascistic National Front was on the march. In response, a protest movement named Rock Against Racism was born in east London, and grew from printing fanzines to organising a punk and reggae festival featuring The Clash in 1978. Rubika Shah splices new interviews with archive footage to make a documentary as energised and confrontational as its subject. Alistair Harkness of The Scotsman says that this “blistering, highly entertaining” film is “sadly, as relevant today as it was then”.

Released on 17 September in the UK and the Netherlands 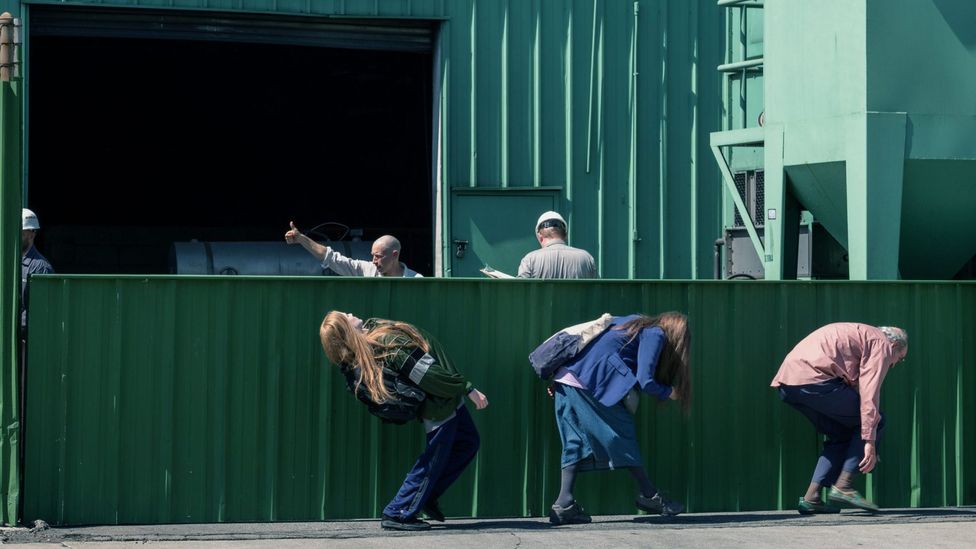 A crime caper with a difference – well, quite a few differences – Kajillionaire is the first offbeat but heartfelt comedy from Miranda July (Me and You and Everyone We Know, The Future) in almost a decade. Evan Rachel Wood plays a twenty-something who has been raised by her parents (Richard Jenkins and Debra Winger) to be a small-time crook in Los Angeles. Like the families in Parasite and Shoplifters, the trio devotes its days to cheating and stealing, but is still stuck in poverty. Things change when the woman makes a new friend (Gina Rodriguez). “Their relationship builds, in a wonderfully roundabout way, to one of the great romances in cinema history,” says Pete Debruge in Variety, “although maybe only we weirdos who identify as Miranda July fans will recognise it as such”.

Released on 18 September in the US, 30 Sept in France and 9 October in the UK 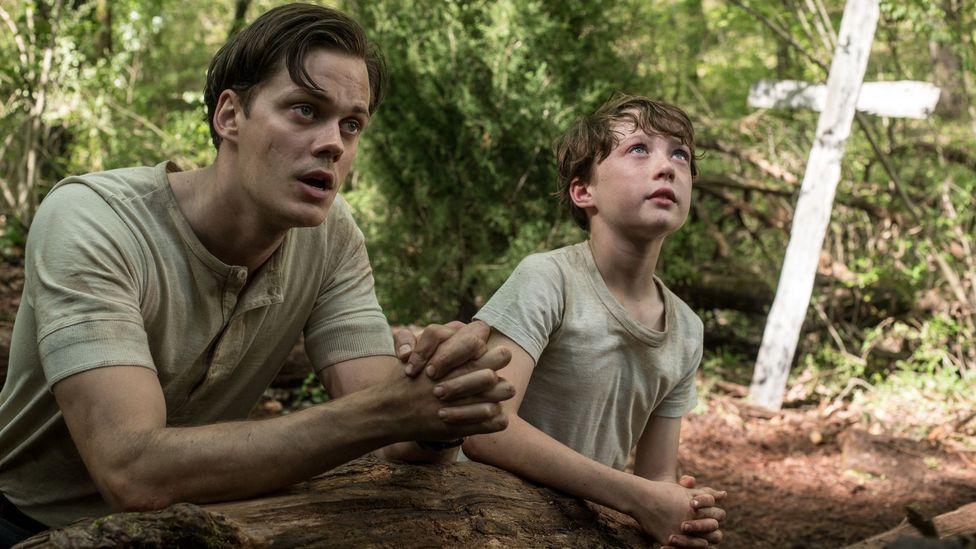 The Devil All The Time still (Credit: Netflix)

The Devil All the Time

Antonio Campos has packed his feverish backwoods gothic thriller with one of the year’s coolest casts. Adapted from Donald Ray Pollock’s award-winning novel, The Devil All the Time charts the crime and corruption in a small religious community in Knockemstiff, Ohio (yes, that’s a real place) between World War Two and the Vietnam War. Tom Holland is a dirt-poor youth who is pushed towards violence, Jason Clarke is a predatory photographer, Riley Keough is the beauty queen who becomes his sidekick, Sebastian Stan is a crooked sheriff, and Mia Wasikowska and Bill Skarsgård are also in the mix. But the performance that could get people talking is Robert ‘The Batman’ Pattinson’s wild-eyed turn as a villainous preacher. “There are certain performances where it almost feels like a possession,” says Campos, “and I think this is one of those performances”.

On Netflix from 16 September

Ghana tightens measures against COVID-19 ahead of airport reopening