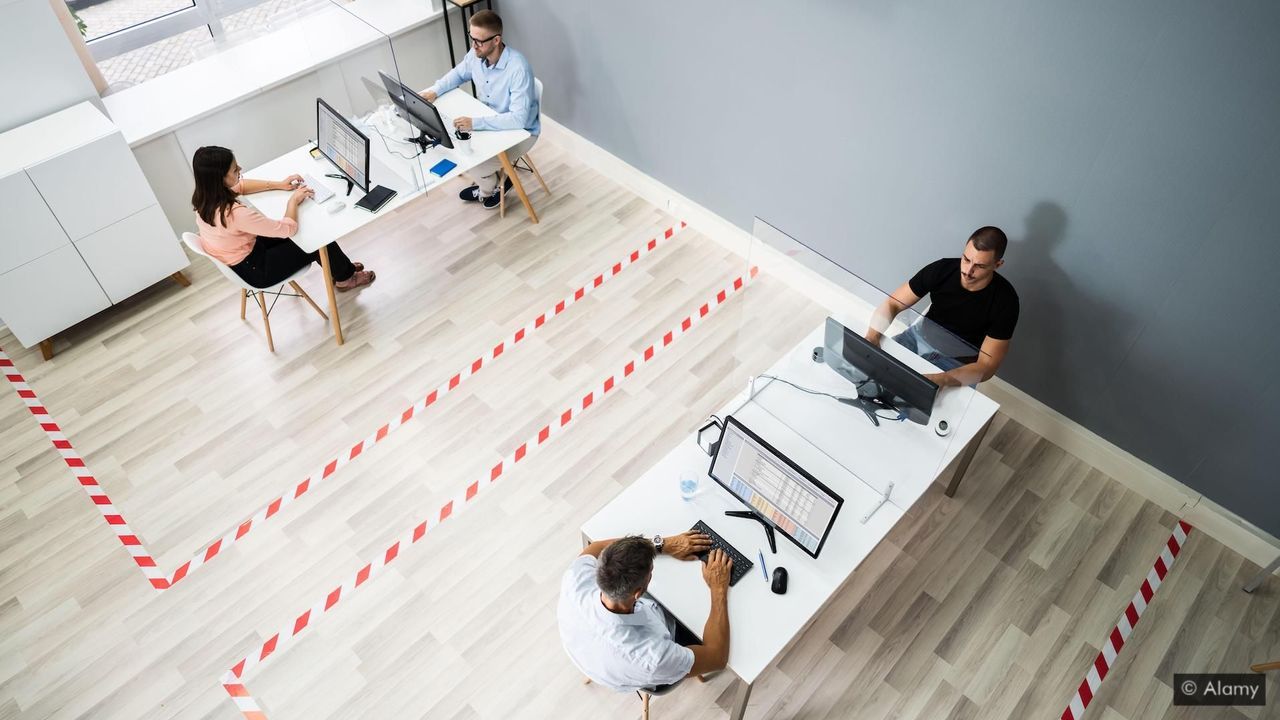 Companies are looking to the post-Covid future. For many, the vision is a model that combines remote work and office time.

Since Covid-19 upended our lives, employees around the world have settled into the rhythms of mandatory remote work. Now, as companies try to decide the best way forward for their workers, it’s clear that many employees don’t want to stuff the genie entirely back into the bottle.

A survey in May showed that 55% of US workers want a mixture of home and office working. In the UK, employers expect the proportion of regular home workers to double, from 18% pre-pandemic to 37% post-pandemic. In China, employment expert Alicia Tung has predicted that in 10 years’ time, there will be a 60/40 split of onsite/remote work.

At the moment, companies are managing in varied ways. Some have given employees permission to continue working remotely until at least 2021. Others have recalled staff to the workplace on different schedules and in staggered groups. Still others are leaving it entirely up to individual workers to decide where to base themselves.

But businesses around the world are also starting to think about the longer term, including alternative ways to structure work communication and hours as well as physical presence. And what many are converging on amid the ongoing uncertainty, says Marco Minervini, an organisational design researcher at business school INSEAD in Singapore, is different models of hybrid working: combining remote work with office work. 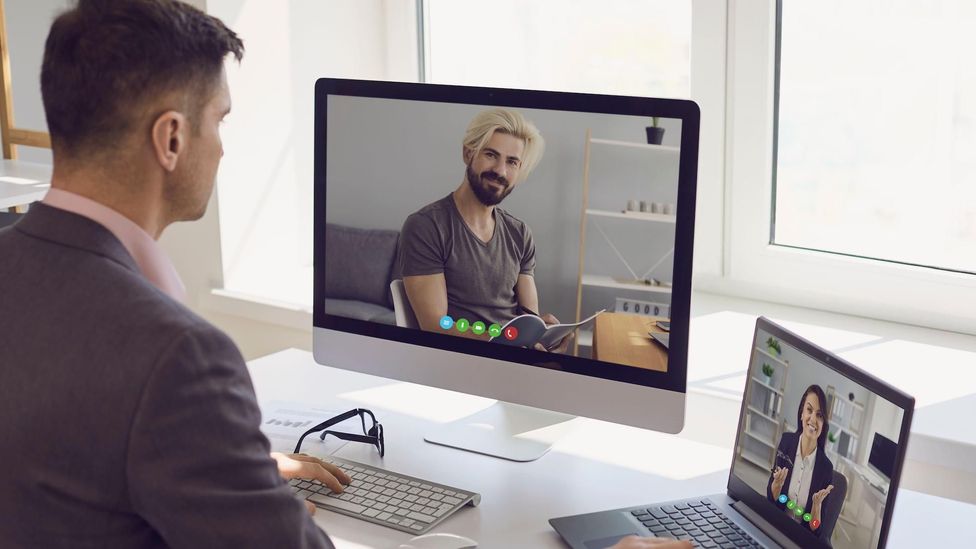 Even those physically in the office should take calls on their own devices, so everyone is communicating in the same way, advises researcher Anita Williams Woolley (Credit: Alamy)

While ‘hybrid’ is key to understanding the more flexible future of work, it encompasses many possible systems. Hybrid work tends to include more freedom around when to work as well as where. It generally grants more autonomy to employees to fit work around the rest of their lives, rather than structuring other parts of a weekday around hours logged in an office. Ideally, it’s the best of both worlds: structure and sociability on one hand, and independence and flexibility on the other.

A common procedure of existing hybrid companies, accelerated since the pandemic started, is to designate certain days for in-office meetings and collaboration, and remote days for work involving individual focus. Physical presence might be required for orientations, team-building and project kick-offs, but not necessarily for other work. “We try to use home working days less for video sessions and more for the tasks that require concentration. A task that may take several hours in the office may be completed in just an hour or two at home,” says Baruch Silverman, founder of personal finance website The Smart Investor. His company, which is based in Los Angeles, went hybrid in June. On the other hand, the company aims for sharing and synchronisation on the days when employees come into the office together.

Some companies are going further. Kissflow, a provider of digital workplace services with offices in the US and India, has introduced a mixed working model called REMOTE+. This combines three weeks of working from anywhere with one week of office-based work. The company covers accommodation costs for the office week, and encourages employees to return home the rest of the time.

Ideally, hybrid work is the best of both worlds: structure and sociability, and independence and flexibility

Meanwhile, the Barlow Law Firm in Chicago, which moved away from office-based work during the pandemic, has kept its office for practical reasons; it still has older paper-based files and key equipment there. “Some files contain thousands of pages of discovery. There is no way we would reprint those things at home,” explains lawyer Maria Barlow. The handful of staff go into the office as needed.

The Chartered Institute of Personnel and Development, an HR professional association, believes that most companies will retain physical offices. But changes are afoot, as some companies will be reluctant to maintain the same amount of office space for a smaller number of workers.

Prior to Covid-19, search engine optimisation agency NOVOS had signed a lease with WeWork for office space. But due to the pandemic, it backed out of the lease and moved to We Membership, “where employees can work from home most of the time but are allocated each a monthly budget to spend on booking workspace”, NOVOS CEO Antonio Wedral explains. Pre-pandemic, almost all employees were based in or around London, but recent hires have been located as far away as Poland. Staff are able to use the We Membership credits at any eligible location, but some still appreciate coming to the same branch. “This has worked very well so far, with many enjoying seeing everyone again, the flexibility, and it is much cheaper than a physical office that we wouldn’t be using properly now anyway,” says Wedral. 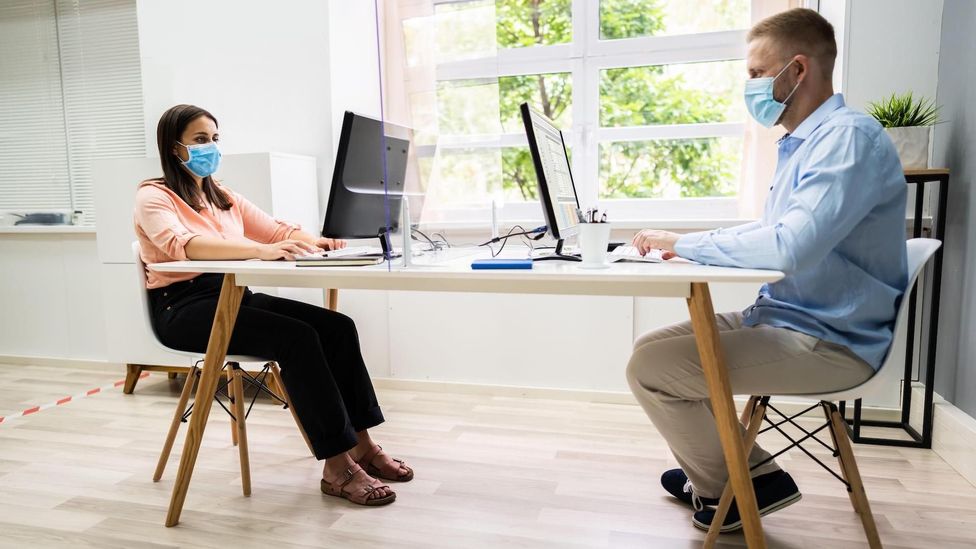 Under a hybrid model, a head office could have a disproportionate share of power, and office regulars will have the edge over home workers (Credit: Alamy)

Nicholas Bloom, a Stanford University economics professor with expertise in remote work, believes that once the pandemic subsides, working from home two days a week will be optimal for balancing collaborative and quiet work, while benefitting from the reduced stress of less commuting. He suggests companies that want to retain their own space consider moving from tall buildings to spread-out industrial parks or campuses to facilitate social distancing.

Anita Williams Woolley, who researches organisational behaviour and theory at Carnegie Mellon University, believes that it makes sense for organisations to evaluate their space and consider downsizing, but without eliminating meeting space. “If anything I’d keep the conference room, maybe get rid of some of the cubicles that nobody likes anyway, and invest in the private workspaces for the people that need to be in the office.”

The darker side of hybrid work

Of course, hybrid working patterns won’t suit everyone. In general, there’s enormous socioeconomic and racial inequality between who is able to work from home and who is not.

The pandemic has drawn attention to disparities among those allowed to work remotely, including the spotty quality of internet access; the demands of parenting and caring; and the luxury of roomy homes and outdoor space that make working from home comfortable. Those squashed into overcrowded flats may not relish having to work from home for the bulk of the week.

There’s also the question of personality. People who appreciate a fixed routine, for example, may find it difficult to ping back and forth between work settings. “I thought I’d be happy to go back, but I have to say that it’s difficult,” reflects Nelson Sherwin, a manager at PEO Companies, based in the US state of Nebraska, which advises on HR services. “I think the key is to just be consistent and you can pretty much adjust to anything – office or remote work. But when you do both, you don’t really get a chance to adjust to either. You’re in and out, never quite able to create a consistent routine.”

According to critics, a hybrid model may also have an in-built inclusion problem. Sid Sijbrandij, CEO of web development platform GitLab, calls hybrid remote work “the worst of both worlds”. GitLab has an entirely remote workforce; it pays for employees to rent office or coworking space should they want it, and to visit each other for work. Sijbrandij has argued that under a hybrid model, a head office will always have a disproportionate share of power, and office regulars will have the edge over home workers. If inadequately planned, this kind of structure would have neither the interaction of face-to-face work nor the egalitarianism that fully remote workforces can aspire to. 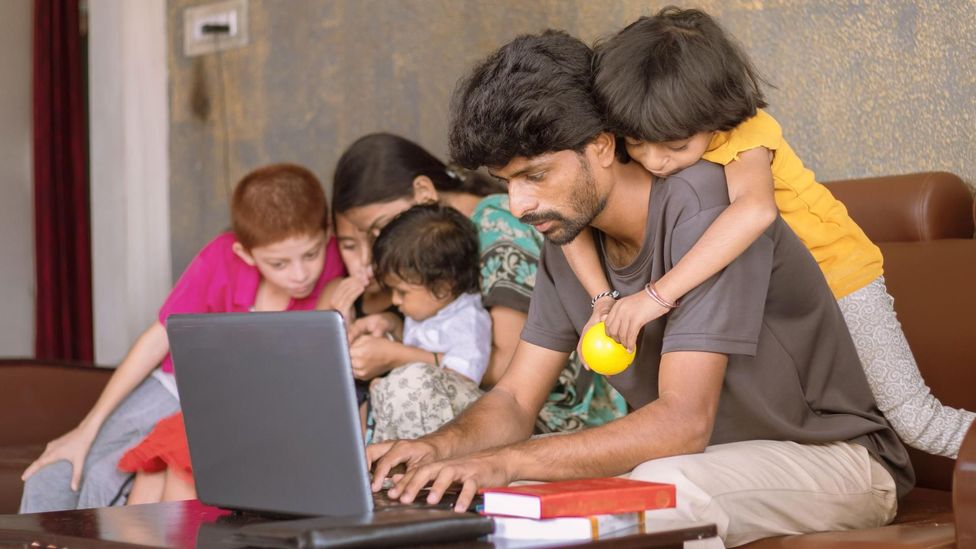 There are hidden inequalities in working from home, as workers with spotty internet or childcare duties may have a much harder time completing tasks (Credit: Alamy)

Organisational design researcher Minervini agrees, saying: “You run the risk of creating in-group and out-group dynamics in hybrid teams.” In other words, a mixed model can entrench a divide between those in the office and those at home (and potentially magnify the gender gap, as women are disproportionately expected to take on home-based caring responsibilities). “And there’s consistent evidence to show that in-group and out-group dynamics reduce collaboration and increase conflict.”

How to make hybrids helpful rather than harmful

Worry over the unintentional exclusion of remote workers is behind one of Minervini’s key suggestions: aim towards equalisation. Ideally all workers would be in the office on the same days, although this may be impractical for socially distanced offices. Leaders should be in the same boat as employees, to whatever extent possible, with roughly equal face time. Further, leaders should be aware of the harms of in-group dynamics.

Transparent communication is also critical. Woolley advises partially distributed companies to have group meetings in a completely distributed way, everyone on their own device. “That way everyone can be seen and heard, so you don’t have the distant conference table with the fuzzy faces,” she explains. “It cuts down on the side conversations, and it forces all of the communication to be much more explicit.”

An efficient hybrid workplace shouldn’t demand that everyone works the same hours, at the same pace

Communication doesn’t necessarily have to be as comprehensive as at GitLab, which has a sprawling, public employee handbook. But more clarity and consistency around procedures is important to avoid conflict, says Minervini.

It also helps foster more empowered employees, which leads into Minervini’s final suggestion for optimising hybrid work: modularisation. This involves dividing up work into tasks that employees can complete independently and make decisions on quickly, without requiring colleagues to be online simultaneously. “You need to break the temporal chain of synchronicity,” urges Minervini. In other words, an efficient hybrid workplace shouldn’t demand that everyone works the same hours, at the same pace, though occasionally this is necessary. A mix of synchronous and asynchronous communication methods helps geographically-distant teams work best.

Ultimately, Woolley is optimistic about the future. Even before Covid-19, she believed that organisations needed to rethink practices that were conventional but not efficient, like taking a flight for a two-hour meeting. “It just takes a little creativity and comfort, getting used to a new way of doing things. And so for me the silver lining in the pandemic is that it has forced organisations to find ways to do that. And I really hope they never go back, because for people’s wellbeing, work-life balance, etc., it just really is better to have this kind of flexibility.”