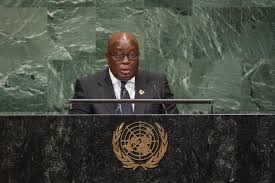 President of the Republic of Ghana, Nana Addo Dankwa Akufo-Addo, took his turn to address the assembly on the second day of the session.

Addressing the Assembly, President Akufo-Addo in a virtual presentation among other things called on the global leadership to forge a collective force in finding a vaccine for COVID-19 and also appealed for a restructuring global financing structures in order to help developing economies battle the effects of the pandemic.

ADDRESS BY THE PRESIDENT OF THE REPUBLIC OF GHANA, NANA ADDO DANKWA AKUFO-ADDO, AT THE 75TH SESSION OF THE UNITED NATIONS’ GENERAL ASSEMBLY, ON THE THEME “THE FUTURE WE WANT, THE UN WE NEED, REAFFIRMING OUR COLLECTIVE COMMITMENT TO MULTILATERALISM”

Mr President, Secretary General, a year ago, we were all looking forward to what, we were sure, would be the grand celebrations at this year’s General Assembly to mark the 75th anniversary of the United Nations. Instead of the anticipated major gathering for the celebrations, we have been forced to stay at home, and employ technology to make our addresses to the Assembly.

It is not only these celebrations that have had to be adapted to changed circumstances; our world has been turned upside down, and we have all been forced to learn new ways of doing things. It would have been implausible to suggest, but we have learnt not to shake hands or hug our loved ones. For many people, the most difficult thing to deal with in these uncertain and unsettling times has been the silence forced on churches, mosques, temples and other places of worship. Singing in groups has become a dangerous activity, and a major item which is preoccupying the attention of world leaders is how to send and keep our children in school safely. All the sacred economic rules by which we have been urged to conduct our affairs in the past century have been thrown out, at least for the moment. Indeed, all our best laid plans have turned out to be of no use, when faced with the ravages of an unknown virus. We, in Ghana, have, however, chalked modest successes in trying to defeat the virus through resolute actions by my Government, the co-operation of the Ghanaian people, and the grace of the Almighty.

Mr President, the lessons are clear: we all fell together and looked into the abyss together. Even as we closed our borders and shut airports, the reality dawned on all of us that we had to rely on each other to be able to get out of the trouble we were in. We have all gone down together, we should all rise together.

If the answer to this pandemic lies in finding a vaccine, that vaccine should be made available to the whole world, rich and poor alike, developed and developing, all races and all beliefs. The virus has taught us that we are all at risk, and there is no special protection for the rich or a particular class. For as long as the virus exists, whatever medical solutions that might be found should be made available for all in aid of our common humanity.

We are told by the Organisation for Economic Co-operation and Development (OECD) that COVID-19 has brought in its wake “a significant reduction in the financing available to developing economies”, again, with the Organisation estimating that “external private finance inflows to developing economies could drop by US$700 billion in 2020 compared to 2019 levels, exceeding the immediate impact of the 2008 Global Financial Crisis by 60%”. The restructuring of the global financing architecture, to enable access to fresh capital by developing nations, now more than ever, is of immediate necessity, if the gains chalked in transforming their economies are not to be eroded, and the standards of living of their peoples are not to be dangerously lowered.

Now is the time for this much discussed and much analysed institution of ours, the United Nations, to rise to the occasion.

One of its agencies, the WHO, has been in the eye of the storm during this crisis, and all of us have to learn the lessons that have emerged. Yes, we should have arguments about the UN and its agencies and their roles, but, after seventy-five (75) years, the arguments should be like the ones we have in our families, and not about their very existence.

We should correct the longstanding injustice that the current structure and composition of the UN, particularly the Security Council, represents for the nations of Africa. Established in those far-off days of 1945, membership of the Council does not presently reflect the realities of the 21st century. The time has come for the adoption and endorsement of Africa’s Common Position on UN Reform, as set out in the Ezulwini Consensus, so we can create a modern United Nations fit for purpose in our time.

We should also focus our attention on the 2030 UN Sustainable Development Goals, especially as we mark the beginning of the Decade of Action to deliver the goals and targets of Agenda 2030. Mr President, as co-chair of the SDG Group of Eminent Advocates, Ghana believes that the effective implementation of the seventeen (17) SDGs remains critical making the multilateral system relevant in addressing the global challenges we face.

Indeed, one such is the threat to the consolidation of democratic governance, especially in Africa, in the face of turbulent conditions prevailing in several parts of Africa. As the newly-elected Chairperson of the Economic Community of West African States (ECOWAS), I say that one immediate test confronting the Community is the political situation in Mali, following the coup d’état that ousted President Ibrahim Boubacar Keita, which has been compounded further by the activities of terrorists and violent extremists, who are in control of large swathes of that country and some parts of the Sahel Region. We have learnt, most often through bitter experience, that terrorism and violent extremism are not restricted to particular geographic locations or jurisdictions, as the impact of a single terrorist incident in one part of the world resonates throughout the world. It is incumbent on the UN and, indeed, all Member States to lend their support to the efforts being made by ECOWAS to restore normalcy to Mali, and help us defeat the scourge of terrorism.

Mr. President, the importance of technology has been reinforced in the time of the pandemic. Virtual meetings are now part of our normal lives, young people have graduated in virtual ceremonies, and we might never go back to some of the many conferences that we used to attend, and it is obvious that technology is the future.

Ghana, therefore, welcomes and endorses the Secretary-General’s recommendation, as contained in the Roadmap on Digital Cooperation, to ensure that no one is left behind. How else would we all have maintained a semblance of keeping in touch in the past six months, but for technology?

The political season is at its height here in Ghana, as we prepare for presidential and parliamentary elections in December. Like everything else in our world today, even the politicking has been affected by the pandemic, and we cannot campaign for votes in the style to which we are accustomed. We are having to rely on technology to find ways of popularising our messages in the time of COVID-19.

It is a matter of great pride to me that, in spite of the difficulties in conducting an election during a pandemic, I am able to state that all Ghanaians are agreed that we have to work together to ensure that the elections will be transparent, free, fair, safe and credible. This will be the eighth election since we embarked on constitutional rule in our Fourth Republic in 1992. Each of the elections has seen an improvement on the previous one, and we are looking forward to this year’s passing off peacefully, with characteristic Ghanaian dignity. We are keenly aware of the reputation that Ghana has built as a tolerant and working democracy, and we have every intention to nurture and improve upon it.

Paramount in everyone’s consideration is the Ghana Project, which aims to modernise all aspects of our lives, and bring prosperity to our land. I have no doubts whatsoever that, at the end of the elections, we shall be proud of ourselves, Africa will have good cause to be proud of us, and the rest of the world will find lessons to learn from us. Last year, 2019, was an extraordinarily exciting year for us in Ghana. It marked the 400th anniversary of the start of the barbaric Trans-Atlantic Slave Trade, and the arrival in America of the first captured slaves from West Africa.

To mark this tragic anniversary, we declared 2019 the ‘Year of Return’, and extended a welcome back to the African continent of the descendants of the slaves who constitute the bulk of the black population in the Americas and the Caribbean. The invitation was enthusiastically taken up, and a great time was had by all.

We have every intention to keep a welcome mat laid out in Ghana for members of the African Diaspora. We, in Ghana, live with the grim reality that the majority of the abducted slaves from the continent were transported to the Americas and Caribbean through the forts dotted along our coastline. We owe it to their descendants to find a safe haven in Ghana, if they should need it.

This responsibility means we have to make Ghana secure and desirable both for her present-day citizens and for those in the Diaspora that might want to come back either for a visit or stay. I extend the best of luck to you all from Ghana, and look forward to a healthy and happy world.

I thank you for your attention.