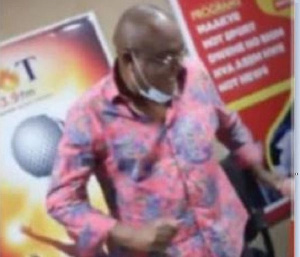 Ghana’s former High Commissioner to the United Kingdom, Victor Smith has been captured in a video dancing to the popular NDC 2020 campaign song titled ‘Mahama Afa’.

At the end of his interview on Hot 93.9FM, Mr Smith decided to dance to the track which was played to him in the studio.

To him, Mr John Dramani Mahama has already secured victory in the upcoming 2020 general elections.

His ecstasy was undeniable, as he engaged in calculated steps and serious dance moves.

However, the song was composed by a Ghanaian musician named KoJo Bee and it has since been embraced by the party, thereby making it their official campaign song for the 2020 general elections.