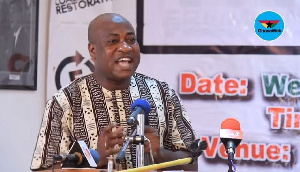 A former Deputy Minister of Trade and Industry, Murtala Ibrahim Mohammed, has said when it was in office, the National Democratic Congress (NDC) supported the Electoral Commission (EC) to deliver its work fairly and successfully.

However, he said, the same cannot be said at the moment that the New Patriotic Party (NPP) is in government.

His comments come after challenges were encountered with the voter register after its exhibition by the EC.

Mr. Murtala, who is NDC’s Parliamentary Candidate for Tamale Central, speaking on TV3’s New Day said: “We have never had a monumental failure in discharging the responsibilities of organizing elections in this country by the Electoral Commission as we are witnessing today or a disastrous problem with the commissioners and Electoral Commission organizing a process such as voters’ exhibition.”

Meanwhile, David Asante, the Managing Director of the Ghana Publishing Company Limited, said the NDC failed to assist the EC do its work ahead of the 2016 elections.