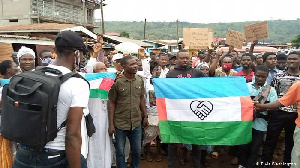 A network of youth groups in the Volta Region has condemned the activities of the secessionists calling for the independence of Western Togoland.

The Volta Youth Network said in a press statement issued on Tuesday, September 29, 2020, that the unfortunate activities of the group can only be fueled by “self-seeking persons.”

“The Volta Youth Network has dissociated itself from this reprehensible act and by this [statement], state clearly that this behaviour does not inure to the benefit of the Youths of the region both home and outside,” the group said.

The secessionist, fronting as the Homeland Study Group Foundation (HSGF), grabbed national headlines on Friday, September 25, 2020, after attacking two national security posts at the entry points of the Volta Region.

On Tuesday some persons suspected to be members of the group also hit the terminal of the state-owned STC bus company, burning down a bus and causing significant damage to another.

In the press statement, the Network of Youth Groups in the Volta Region said Ghana can grow through the conscious mobilisation of different cultural diversity to form a unique strength to fight poverty and inequality which has been Ghana’s greatest enemy since independence.

“We as a Network believe we cannot fight inequality in areas of development by destroying the very fundamental things that help us to co-exist and live in peace with one another. “What the youth of Volta Region want are quality education and skills development which are key fundamentals for sustainable job creation and human development. The youth of Volta and Ghana at large need to take commensurate actions that can lead us as one people called Ghanaians to our desired promise land. We can do this and should it in the framework of equal respect for one another as Ghanaians and move together as a nation with the principles of Human Rights and fundamental freedoms,” the group said in the release.

Already, chiefs in the region have condemned the group, the Network of Youth Groups in the Volta Region has called on other associations in the region “to stand up and resist these people, not with violence but refusing to use their energies in unprofitable attacks like this recent one before we all begin to sit on a round table one day to be negotiating the very peace we are already enjoying today.”

“We cannot afford to allow anyone to destroy the very peace we have enjoyed all these years. Whatever their reasons may be, cannot be more than the national cohesion that binds us together as a people,” the group stressed.

Volta Youth Network, in the press statement, also appealed to youth in the region who have been recruited by HSGF to cause mayhem to sit up and rethink their decision to join them.

“Our brothers and sisters, we have one Volta and we must preserve it irrespective of anything. We have our brothers and sisters with us, wives, grandparents, uncles, aunties these people took care of us in peace so we could grow and serve our land in love and peace. I ask, what has changed or what is changing now?

“We have several examples of regions and countries that have walked these roads and the results are there for us to analyse and see if we want to go this way,” the Network said in the statement.

Ghanaians have waited too long for you – Chief to Naana Jane