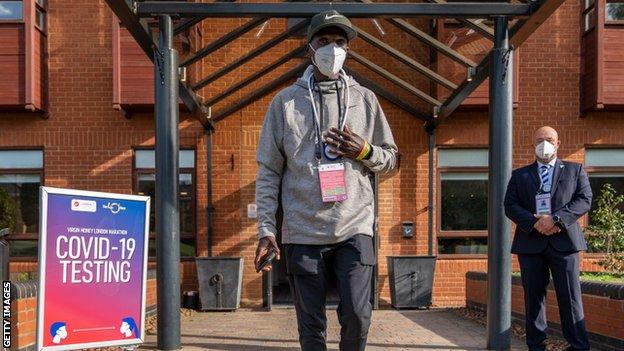 The race will be run over 19 laps of a closed course, screened from public view, as part of Covid-19 measures.

The mass participation element of the race will be run ‘virtually’ with only the elite fields gathering in London.

“We can bring hope to the world that we can train behind the scenes and come back in a strong way,” said Kipchoge.

Asked about his chances of retaining his title, Kipchoge replied: “Absolutely I am confident. I am ready and fit to run.”

Kipchoge admitted that that the absence of a crowd, which usually numbers tens of thousands, would make a “huge, huge difference” to the event.

The 35-year-old will be taking on Ethiopia’s Kenenisa Bekele, who was just two seconds off his rival’s world record in Berlin last year, in a keenly anticipated duel.

The pair have been backed by event director Hugh Brasher to bring the best out of each other despite the forecasted wet weather.

“Whatever the conditions, we believe there will be some incredible racing that will live long in people’s memories,” said Brasher. “It could be incredibly quick.”

The duo have also opted to wear different technologically advanced trainers for the race, with Bekele choosing the Nike Vaporfly Next% while Kipchoge will run in the Kenya edition of the Nike Alphafly Next%.

Kipchoge wore the controversial prototype ZoomX Vaporfly shoes when he became the first athlete to run a marathon in under two hours.

“We live in the 21st century whereby firstly we need to accept change, secondly development goes hand-in-hand with technology,” Kipchoge said of the advancement in technology of running trainers.

“The shoe is good and they accepted the technology patent – we need to accept technology in our hearts, move on.”

British four-time Olympic champion Mo Farah will be one of the pacemakers in the race, although he will be focused on helping a mainly British group achieve the Olympic qualifying time of two hours 11 minutes 30 seconds.

His landmark sub-two hour marathon in Austria last year is not recognised as the official marathon world record because it was not in open competition and he used a team of rotating pacemakers.

The Scottish Open, but not as we know it as fans miss out