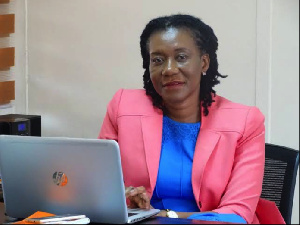 The Executive Director of the National Population Council Dr Leticia Appiah has been directed to proceed on terminal leave by the Board of the council.

The letter asking Dr Appiah to proceed on leave was signed by the Board Chairman of the National Population Council.

Some staff have accused Dr Appiah of authoritarian rule, leading to the suspension, transfer, and cuts in salaries of some senior management staff.

But the Executive Director says she will not vacate her office until a final verdict is delivered from the appointing authority.

The matter was referred to the CHRAJ by a staff Justice Joseph Asante, and a report released to that effect.

When asked if she had contacted her board chair, she noted “unfortunately she’s not picking up her calls. I’ve not been able to get through to her. I think the most important we should be looking at is the final decision.

A member of the Board has also stated that the decision to direct the Executive Director to proceed on leave was not a collective one.

Speaking on the Morning Starr, Cecelia Senoo, a member of the Board said the decision at the last meeting was to assess the performance of the of the Executive Director and make recommendations.

“During our last meeting, the decision was to assess her performance and make recommendations. Some of us on the board have no idea that the Executive Director at the National Population Council has been asked to proceed on leave.”

She added “How can you ask her to proceed on leave? Where do you want her to go? In any case, she was appointed by the President. I think we should have done the assessment, checked the gaps and then recommendations given to who appointed her.

“I know there are issues between the staff and the Executive Director which the board was supposed to address. From my point of view, we haven’t been able to address issues to ensure that things get back to normal. I think it’s been a failure. We must change things that won’t help the institution grow but they must be addressed objectively and holistically.”

However, a staff member told Morning Starr that the decision to ask Dr Appiah to proceed on leave was in the best interest of the council.

“All I know is that her tenure is over. I was one of the people she antagonized and it’s because I kept drawing her attention on issues. Also, because I kept fighting for the interest of the staff. The Executive Director at the National Population Council has threatened junior staff that they should see what’s she’s doing to senior staff and be careful. For bread and butter issues, you’d expect that the situation does not get out of hand. For example, she has blocked our salaries and that’s illegality.”

Rawlings loved the ordinary man on the streets – Ben Ephson