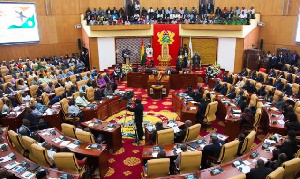 The Africa Education watch is questioning the education minister’s motive for relaying the controversial Public Universities Bill (PUB) in Parliament.

Parliament in October suspended the bill seeking to harmonize governance, operations, and administrations of public universities in the country.

The bill has been a source of controversy on the education front with many stakeholders including UTAG and the Ghana Academy of Arts and Sciences rejecting its content over claims government is seeking to control tertiary institutions.

The bill was relaid before the house, a move that is being criticized by the Africa Education Watch.

Executive Director Kofi Asare told Starr News that the minister at the eleventh hour tabled the withdrawn bill in parliament just before they went on election vacation.”

“Of course, we were quite worried in the sense that we were of the opinion that in view of the various public disaffection, the bill was recalled for extensive engagements with stakeholders especially UTAG on the contemptuous issues that sought to make universities part of the ministry of education. Unfortunately, we are not aware of any such broad consultations, and that days after its withdrawal the minister has quickly laid it back at the committee level.”

On whether government is determined to move forward despite the opposition, Dr Asare indicated “it’s obvious that government has a vested interest in taking over the management of universities and that is unfortunate. Because when you are pushing through a law and the stakeholders, people for whom the law is being developed, raising issues that the intention of the law is not right, and you wanna push through a law then it becomes a problem. It’s very obvious that government just wants to control the universities.”

“We fear that with this insatiable urge by the minister to ensure that universities kowtow to every dictate of himself and the ministry, our universities might one day become just like public institutions. We have engaged our stakeholders and our partners to join in this campaign to push out the PUB. We are restrategising to meet the ministry and parliament when parliament reconvenes after the elections to make sure we male it unpopular until it’s thrown out.

Dumsor: Show me one power plant you have added to existing ones – Mahama to NPP