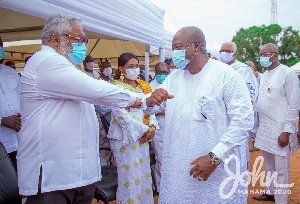 Presidential Candidate of the National Democratic Congress (NDC) John Dramani Mahama has said the late former president Jerry John Rawlings was able to bring an end to the overthrow of constitutionally elected governments in Ghana.

In a tweet, Mr Mahama said “His fight for social justice, the principles of probity & accountability led to major interventions that ended coup d’etats in Ghana.

“He’s the Founder of our 4th Republic, easily the longest period of stable, democratic governance in the history of Ghana.”

“He will make you feel at home and always make you happy,” Mr Adams told host Abena Tabi.

In a statement reacting to the news of his death on Friday, November 13, his successor, Mr Kufuor said: “My wife Theresa and I are deeply saddened by the passing of former president Jerry John Rawlings whose untimely death reported yesterday came as a thunderbolt to us and our children.

“President Rawlings was the longest-serving head of state since our nation’s independence in 1957, and even though it wasn’t always he and I agreed on many matters if the state – I felt that he was trying to do the best he knew and could, under his peculiar circumstances.

“When the time came for him to step down as president on 7th January 2001 he obliged and obviously tried to contain whatever reservations he had about me and my government that succeeded him and his government, within the bounds of the national constitution of 1992.

“In this regard, whether doubts persisted about his commitment to democracy rule became attenuated and earned him a legacy of contributing to the sustenance of democratic governance of our country to his demise. History would give him a balanced place in the annals of our nation.”