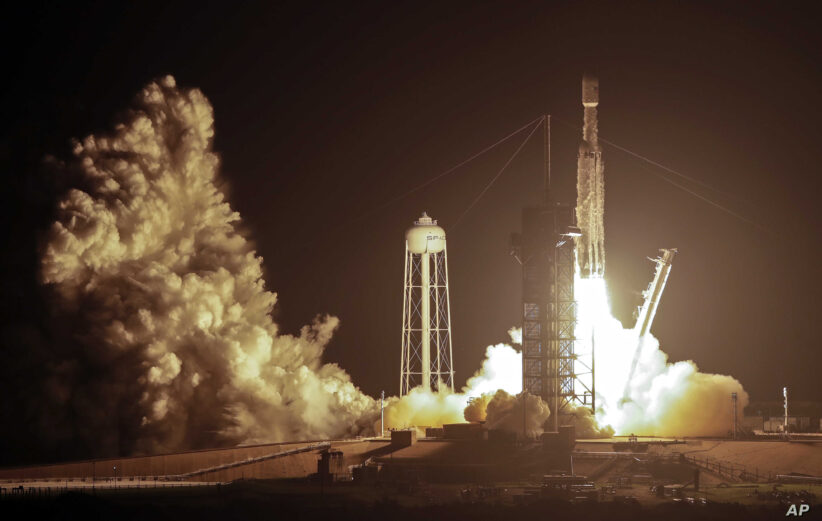 A SpaceX Falcon heavy rocket lifts off from pad 39A at the Kennedy Space Center in Cape Canaveral, Fla., early Tuesday, June 25, 2019. The Falcon rocket has a payload military and scientific research satellites. (AP Photo/John Raoux)

SpaceX successfully launched its second crew of astronauts to orbit this evening inside the company’s Crew Dragon spacecraft. The flight, called Crew-1, marks the first operational mission of the Crew Dragon, as SpaceX embarks on a new era of regularly sending people to and from the International Space Station for NASA.

The Crew Dragon took off at 7:27PM ET on top of SpaceX’s Falcon 9 rocket, launching from NASA’s Kennedy Space Center in Florida. Flying inside the capsule are three NASA astronauts — Mike Hopkins, Victor Glover, and Shannon Walker — as well as Soichi Noguchi, from the Japanese Aerospace Exploration Agency, or JAXA. Now in orbit, the crew will spend the next more than a day in space before docking with the ISS on Monday at around 11PM ET. The Crew Dragon is designed to automatically dock to the space station, without needing input from the crew inside.

After takeoff, the Falcon 9 booster successfully landed on the drone ship “Just Read the Instructions” in the Atlantic Ocean. The plan is for the booster to be re-used on SpaceX’s next crewed mission, Crew-2.

While this is SpaceX’s second crewed flight to space, it’s the first true long-duration mission of SpaceX’s new Crew Dragon spacecraft. The Crew Dragon’s first crewed flight to space in May lasted just two months from start to finish. That flight was a test — meant to demonstrate that the vehicle can safely transport people to the space station and bring them back home again. It succeeded, and now the Crew Dragon is the first vehicle that NASA has certified to carry humans since the Space Shuttle — and the first private spacecraft ever to receive that designation.