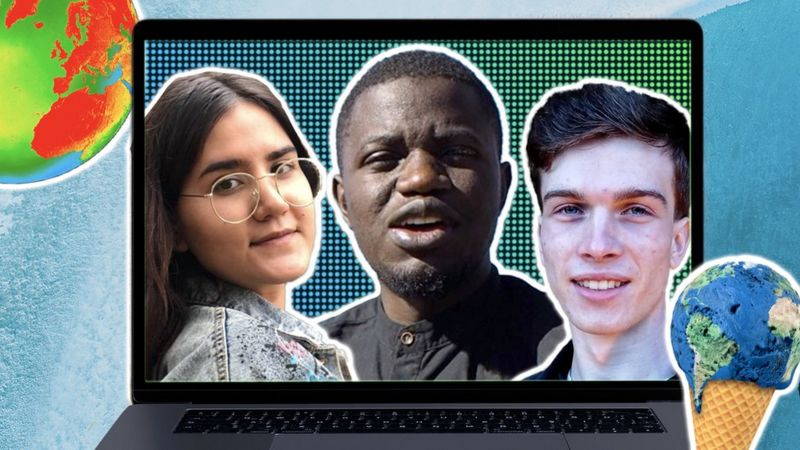 Hundreds of young environmental activists from around the world are meeting virtually to call for greater action on climate change.

With the international climate talks that were due to be held in Glasgow this year delayed until November 2021 because of the coronavirus pandemic, young people have decided to create their own.

Unlike the UN summit, COP26, the youth-led Mock COP is not based anywhere physical.

Workshops and talks are being hosted virtually across multiple time zones, reducing carbon emissions by 1,500 times that of previous COP events, according to organisers.

From Thursday until 1 December, more than 350 young environmental activists from 150 countries will hold discussions and hear from a range of climate experts to produce a final statement of demands.

The aim? For countries to consider adopting them into law.

‘We are the leaders of today’

Co-organiser Dom Jaramillo, 21, from Ecuador, says the event was born of frustration at the postponement of climate talks.

Dozens of world leaders will attend the summit between 1 and 12 November next year – in the most important round of talks since the global Paris Agreement to tackle climate change in 2015.

“We decided we had to do something because we are in a climate emergency,” she told BBC News.

Business Secretary Alok Sharma, who is president of COP26, will speak on the first day of Mock COP.

He says the event will further show “the appetite that exists across the world for governments and organisations to take ambitious climate action”.

Josh Tregale, 18, from the UK, decided to defer his place at university to get more involved with environmental work.

He says he wants to set an example for how COP could be run in a low-carbon way.

“At a normal COP summit, delegates fly in from around the world. They can emit more than 50,000 tonnes of CO2 – whereas ours will emit around 39 tonnes of CO2,” he said.

“If each year those carbon savings were made by government meetings that could have a huge impact.”

Mock COP organisers say they want to address complaints about a lack of diversity in the climate movement and fears that countries most affected by climate change are not being heard.

They have given countries from the Global South more young delegates and speaking time than richer countries.

Dom says the Global South – which refers broadly to areas in Latin America, Asia, Africa, and Oceania which would previously have been described as developing countries – needs greater representation in climate talks.

“We feel voiceless because we are the most affected,” she said.

Growing up on a banana farm in Ecuador, she says she has seen the impact of climate change firsthand.

“We didn’t have enough water, our soil was deteriorating. We are really worried about what is happening. I’m worried about my future,” she said.

Research suggests that Africa is more vulnerable than any other region to the world’s changing weather patterns. Hundreds of millions of people depend on rainfall to grow their food.

In Zambia, where young activist David Watson Mwabila lives, temperatures are predicted to rise by 5C or more. David is concerned that these changes could lead to malnutrition.

“Climate change is going to make it difficult for us to grow food. As a result, it would directly contribute to malnutrition and stunted growth in children,” he said.

“Keeping global temperature rise below 1.5C is very unlikely because the current political climate is too hostile. We need to work together as a global village taking decisive steps to combating climate change.”

How it will work?

For Josh, this is an important moment to raise ambitions for COP26 next year.

“We can show world leaders that young people can do more than just protest, we can come up with ideas and put things in place as well,” he said.

The delegates will work with scientists and environmental law charity ClientEarth to produce a final statement of demands that could be developed into a legal treaty for countries to consider adopting into law.

It is thought one of the demands will call for young people to be included in each country’s delegation at COP26.

How electric cars are charged and how far they go: your questions answered

Portions of Pokuase, Obetsebi-Lamptey interchange projects to be opened Nov 25