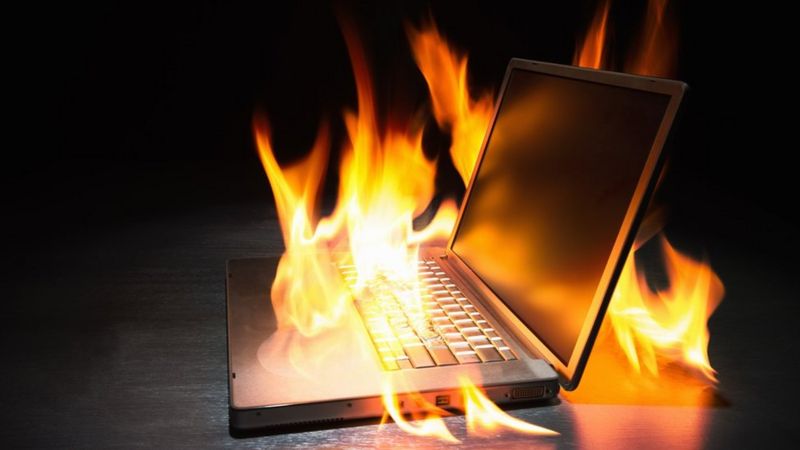 A laptop which caught fire after being fitted with a battery bought on Amazon has prompted safety charity Electrical Safety First to warn of the dangers of buying cheap electronics online.

It said that it had found “some extremely dangerous items” for sale on Amazon, eBay and Wish.

The warnings were echoed by watchdog Which? and the Trading Standards Institute.

The charity wants to see government legislation on the issue.

Rachel Kent, 40, bought a replacement battery on Amazon from a third-party seller.

“It was about 22:30, I was at home in my kitchen about to take my two dogs for a walk. My laptop was on a hard table, charging.

“I heard a very loud crackle and bang from the laptop. Panicking, I fled into the garden, taking my dogs with me and looked in horror to see the laptop go bang again and catch fire, spreading along the table.”

She called the fire brigade and the blaze was extinguished.

“Luckily my two kids were staying at their grandmother’s that night but if they’d been in the house at the time the fire would have between them and myself which is absolutely horrible to think about.

“I was told it was the battery of the laptop that was at fault. I’d bought the replacement battery from Amazon through a third-party seller after the original battery died.”

Many others are likely to make similar purchases in the run-up to Christmas, said Lesley Rudd, chief executive of Electrical Safety First.

“We would urge people purchasing electrical products to use the stores of websites of known manufacturers and retailers such as those found on the High Street, rather than resorting to third-party sellers on online marketplaces.

“Our investigations have found some extremely dangerous items for sale on these platforms and sub-standard or counterfeit products are often very difficult to spot to the untrained eye.”

Sue Davies, head of consumer protection at Which? echoed her words.

“Which? has repeatedly found concerning levels of dangerous products being sold on online marketplaces, including items that are likely to be gifted over the festive period, such as Christmas lights and baby toys.

“With people relying on online shopping more than ever this winter, online marketplaces must be given more legal responsibility for the safety of the products available for sale on their sites, so they can keep people safe and prevent any dangerous products from ending up in their customers’ homes this Christmas.”

Both are campaigning for legislation from the UK government which would force online marketplaces like Amazon, eBay and Wish to have responsibility for all goods sold on their platforms.

David MacKenzie, lead officer for e-commerce at the Trading Standards Institute urged consumers to “do their homework” and check out online traders before buying from them.

“Don’t rule out the option of buying from a trusted local ‘bricks-and-mortar’ shop, which can provide extra assurance and customer service,” he said.