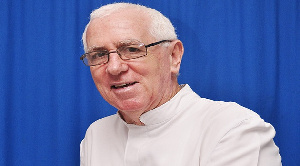 The venerable Reverend Father Andrew Campbell has been recommended as a mediator for the seeming verbal war between the President Nana Addo Dankwa Akufo-Addo and former Special Prosecutor Martin Amidu.

Franklin Cudjoe, the President of IMANI Africa reckons that the revered Roman Catholic priest ought to be brought in, to avert further banters between the president and the outspoken Martin Amidu.

He also called for protection for Martin Amidu who has hinted of being in danger following his work on the Agyapa deal.

“We need Rev.Father Campbell to intervene to avoid further ‘blood’ between Amidu and Nana. Amidu should confide in Campbell all he hasn’t said. Amidu must be protected”, he posted on social media.

Franklin Cudjoe’s clarion call comes on the back of Martin Amidu’s first-ever public statement since his controversial exit from the Special Prosecutor’s Office.

Amidu, who left the scene with an allegation-ridden resignation letter to the Presidency, said in a Citi FM interview, that he feels threatened and that President Akufo-Addo will be held accountable if there’s a scratch on his body.

“The intelligence is there and I called the minister of national security but he didn’t pick and I got a former national security advisor to speak to him and this fact is now known and I say that the president will be responsible for anything that happens to me. I’m a Ghanaian and I don’t fear anything and, as I said, to die in the cause of fighting corruption is what I started with President Jerry Rawlings on 31st December 1982 and I’m not going to leave it because some people think that they can threaten me. I don’t give a damn about that.

“…If they don’t stop, I’ll respond”, he threatened, saying: “As to what I’ll do, I reserve that for myself but as I said, whatever happens to me, I lay my life for the republic of Ghana and the president has a constitutional duty to protect me. I don’t need any security in my house or to follow me. And anybody who makes an attempt, he will have himself to blame”.

President Nana Akufo-Addo has meanwhile ordered the IGP to as a matter of urgency give Martin Amidu, 24-hour police protection.

He also asked Amidu to assist the police to investigate and arrest the faces behind the death threats.