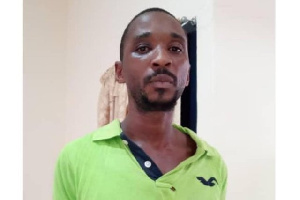 It has emerged that one of the suspects involved in the kidnapping and murder of the Takoradi girl had a pastoral certificate.

The DailyGuide reports that Detective Chief Inspector Dorcas Asare of the Criminal Investigation Department (CID) of the Ghana Police Service, disclosed to the Sekondi High Court that one of the items retrieved during their search at Samuel Udoetuk Wills’ room, is a pastoral certificate that bore his name.

Detective Asare, during cross-examination on Wednesday, told the court that aside the pastoral certificate, they also discovered SSCE, birth certificates and four mobile phones from his room.

She disclosed to the court that interactions between Samuel Udoetuk Wills and the second accused person, John Oji, as well as statements taken from them during investigations, reveal that, they are the culprits behind the kidnapping and killing of the four girls.

The newspaper reports that lawyer for Samuel Udoetuk Wills, George Essiful-Ansah, sought to question the evidence tabled by the prosecutors, by asking if indeed his client is the owner of the four mobile phones they saw in his room.

Detective Asare responded in the affirmative but the lawyer claimed it was false.

Lawyer George Essiful-Ansah said two of the mobile phones belong to the girlfriend of Udoetuk Wills, contrary to the prosecutor’s claims.

He further made some allegations and questions which were either refuted or defended by Detective Dorcas Asare.

Meanwhile the newspaper is reporting that January 28, 2020 has been set as the day for judgment on the case.

This follows the cross-examination of 23 witnesses in the cases.