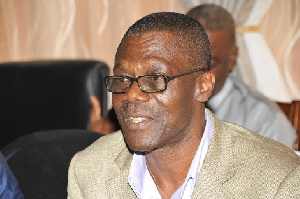 The opposition National Democratic Congress has appealed to the Inspector General of Police James Oppong-Boanuh to ensure that police personnel who will be providing security on election day are properly identified.

According to the party, such a move will ensure transparency and boost confidence in the electoral process.

“The attention of the NDC has been drawn to a circular issued by the Inspector General of Police to the effect that only traditional police uniforms would be worn on Election 2020 duties and related operations. According to the circular, traditional uniforms for this purpose will be “blue-black/black and camouflage uniforms”.

“The NDC believes that these measures derive from the lessons learnt from the embarrassment the Ghana Police Service suffered during the Ayawaso West Wuogon bye-election disgrace. We, therefore, commend the IGP and his staff on plans drawn by the National Election Security Task Force to sanitize the security situation, maintain law and order on December 7 election day, and ensure peace. However, the NDC is of the view that the announcement on the authorized uniform to be worn on D-Day will be inadequate without ensuring that all Police personnel and others drawn from other security agencies are properly identified with their names clearly displayed on their uniforms,” a statement signed by the party’s Director of Operations Lt. Col. (Rtd) Larry Gbevlo-Lartey said.

It added: “This normal dressing requirement for all service personnel should be strictly enforced to assuage fears that some Police uniforms being sewn will find its way into the hands of vigilantes/hoodlums recruited by the ruling Party/government to intimidate and suppress voters in opposition strongholds. Indeed, the NDC takes seriously information making the rounds that persons other than genuine Police officers some of whom were described as National Security operatives who committed acts of brigandage during the Ayawaso West Wuogon by-election last year will be clothed in such Police uniforms to avoid detection.

“It is our contention that the wearing of name tag identification is the surest way to safeguard the integrity and image of the Ghana Police Service and other security agencies that will be deployed for election day security activities”.

Amewu has kept our lights on, vote for him – Akufo-Addo