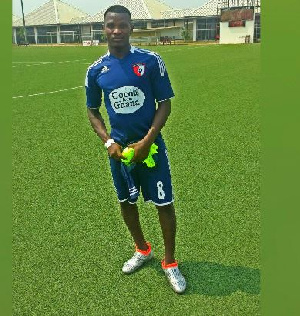 Ghana midfielder Osman Bukari scored his first goal for Gent on Sunday when they defeated Charleroi 1-0 in the Belgian top-flight.

The 21-year-old scored the only goal of the game as they coasted to an important away victory against the league highfliers.

Bukari, a Ghana U23 international, hit the target just before the break and his side held on for the victory.

The Ghanaian youngster has been an instrumental figure for Gent even though he has been played out of position since securing the move from Slovakia.

Despite that, he has set up some goals for the team that has made him a great asset for Gent after his move from Trencin.

The victory moves Gent to the 12th of the league table after the away victory against the third-placed team.

Bukari has already been rated as the fastest player in the Belgium league as his speedy displays for the club has not gone unnoticed by observers of the game.

His maiden goal in a competitive match for Gent is signal that he is keen on replicating the form that saw him recognised as the best player in Slovakia before sealing his move.

The youngster played for Ghanaian side Accra Lions before moving to Trencin when he cut his teeth in Europe before going to Belgium.

He is among a handful of Ghanaian players excelling in one of the top leagues in Europe.