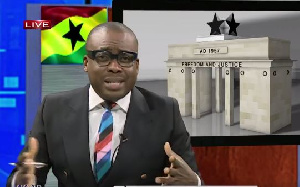 The host of Good Evening Ghana programme, Paul Adom Otchere has described Martin Amidu’s reason for not taking former president John Dramani on for his alleged role in the airbus scandal as untenable.

His comments follow a statement by the special prosecutor that former President Mahama is not being investigated because he is running for the presidency on the ticket of the biggest opposition party.

According to Adom-Octere, the laws governing special prosecutor Martin Amidu’s work do not give him the room to use his discretion when deciding to prosecute.

Speaking on his Good Evening Ghana programme, he said Mr Amidu should have gone ahead with investigations if indeed Mahama was implicated in the airbus scandal.

The political programme host further called out the special prosecutor for exercising strange discretion in cases of corruption.

“ You don’t have the power to decide on issues with your discretion. You are the special prosecutor. You can even on your own investigate them. What is this strange use of discretion? John Mahama called him something major and I cannot repeat that.

The Special Prosecutor, Martin Amidu, on November 16, 2020, resigned from his position three years after he was appointed by President Akufo-Addo.

He cited interference by President Nana Addo Dankwa Akufo-Addo as one of the reasons for stepping down.

If you can create 1 million jobs, why didn’t you do so as President? – Samira to Mahama