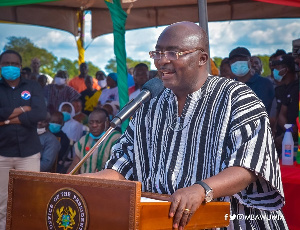 Vice President Mahamudu Bawumia says the Akufo-Addo-led government envisaged to make education holistic and a catalyst for development in all Zongo communities.

He called for concerted efforts by all stakeholders to invest in children’s education, especially vulnerable children in Zongo communities, to engender holistic development.

“We (the NPP government) are for the development of Zongos and the education of our children to the highest level possible. Our vision and focus is to make education the catalyst for Zongo development,” he said.

“If you want to see Zongos develop, let us invest in the education of our children.”

Dr Bawumia said this when he commissioned a newly constructed AstroTurf at New Fadama, a suburb of Accra, on Tuesday, which has a changing room, spectators stand and fence.

The football park was named after the National Chief Imam, Sheikh Dr Osman Nuhu Sharubutu, in fulfilment of a promise President Akufo-Addo made in April 2018 during the Chief Imam’s 99th birthday.

“Transforming the park into an ultra-modern edifice for the football-crazy youth of New Fadama and its environs was as apt as naming the facility after the most iconic member of the community and one of the greatest statesmen the country has produced,” he said.

“The construction of the Astroturf, as well as similar ones in Kyebi, Walewale, Tafo and Madina Zongos, is part of a broader vision of the Akufo-Addo-led government to provide meaningful development for Zongos and inner cities,” the Vice President stated.

He said within four years, the NPP-led government had constructed 29 Astroturf as against two the NDC government built, with Zongo communities alone getting 10 of them.

Dr Bawumia said a special talent hunt project would soon be launched to unearth, nurture and promote football in Zongo communities. He reiterated government’s new tertiary students’ loan policy through, which students would not need any guarantor to access.

Dr Mustapha Abdul Hamid, the Minister of Zongo and Inner Cities Development, said Ghanaians were very sure of their preference when it came to who they wanted to lead the country.

That, he explained, was because of the change and transformation the Akufo-Addo-led government had championed across Zongo Communities.

Superintendent Hussein Abdul Rahim, Chief Imam of the Ghana Police Service, urged Muslims to go the extra mile to ensure peace by co-existing peacefully and in harmony with one another.