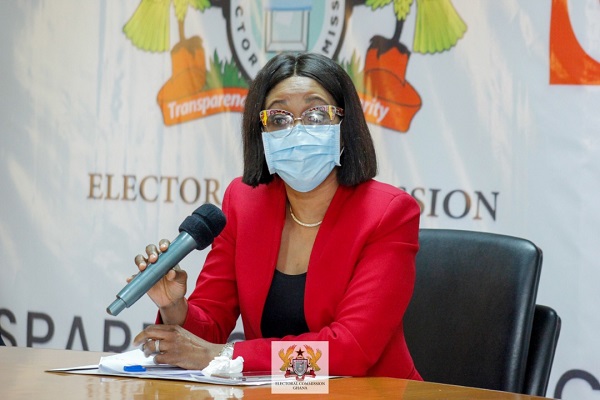 As part of measures to help reduce  the number of rejected ballots in the December 7, 2020 general election, the Electoral Commission (EC) has increased the size of the black border lines separating where the thumbprint should go on the ballot paper.

In the 2016 general election,  the EC introduced a similar measure.

But in 2020, there has been a further improvement in the design of the ballot paper.

The boxes are larger and the black lines in between the candidate’s pictures, symbols and where the thumbprints should go are thicker.

This is to help minimise the incidence of thumbprints which stray from one box into another, causing a rejection of the ballot.

One of the main issues that has been of concern in Ghana’s elections is the issue of rejected ballots.

The EC over the years have taken steps to minimise the incidence of rejected ballots with public education supported by the National Commission on Civic Education (NCCE).

Aside the extensive education on the voting process, rejected ballots are still high.

In spite of Ghana’s globally acclaimed democratic credentials, the issue of rejected ballots during the elections remains a challenge.

There has been concerns that without adequate education, going into the December 7 elections, the situation may repeat itself especially with 12 candidates on the ballot paper for the presidential election.

How reject ballots come about

Rejected ballots come about when some voters do not do things right or simply get confused with the voting process, thereby wasting the most sought-after electoral asset, the ballots.

Since Ghana’s return to multiparty democracy in 1992, rejected ballots have increased  in every election.

All these are significantly huge numbers that cannot be discounted in any election.

In the 2008 presidential election, for instance, the number of rejected ballots recorded in the first round was significantly higher than ever, both in terms of figures and percentages.

Hypothetically, the “rejected ballot party” placed third in the 2008 presidential race, ahead of Dr Papa Kwesi Nduom of the Convention People’s Party (CPP), who placed third with 113,494 votes, constituting 1.34 per cent of the total ballots cast, behind Professor John Evans Atta Mills of the National Democratic Congress (NDC), who placed second with 4,005,634, constituting 47.9 per cent of the votes and Nana Addo Dankwa Akufo-Addo of the New Patritotic Party (NPP), who garnered 49.13 per cent.