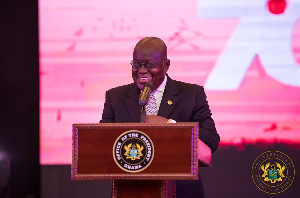 President Nana Addo Dankwa Akufo-Addo has said the unemployment rate has reduced under his administration.

This is as a result of deliberate job creation policies such as the Nation Builders Corps (NaBCo), the president said.

In a tweet on Thursday, November 26, Mr Akufo-Addo said “11 days more to Election Day. It’s important to remember that under the NPP government, there is a huge reduction of unemployment as a result of deliberate job creation policies such as the NABCO. Vote for Akufo-Addo and the NPP to create more jobs. #AkufoAddoHasDelivered.”

Meanwhile, a former lawmaker for the Nkawkaw Constituency in the Eastern Region, Seth Adjei-Baah, has said but for the laws of this country that make it mandatory for elections to be organized, President Nana Addo Dankwa Akufo-Addo should have been allowed to continue governing the country for the next four years without having to slug it out with anyone in an election.

This comment comes on the back of his assertion that Mr Akufo-Addo has delivered and rescued the nation from the economic doldrums the previous administration left behind.

He explained on Onua FM’s Ghana Dadwene on Wednesday hosted by Nana Yaw Opare that all the key economic indicators are currently pointing to positive directions owing to the good economic policies introduced by Mr Akufo-Addo and his team.

“If not because of law, Ghana should not have voted because he [Akufo-Addo] has brought deliverance o Ghana,” he explained.

He added “education, infrastructure, planting for food and other developmental projects that this government has done alone should win us power. He [Nana Addo] is a visionary leader. People said Free SHS was bad and so we need progressive one now they say they started the free SHS. God has given Nana Addo the vision to lead this nation. Nana has a vision, he is leading us and we will get there. I support his vision.”

He further expressed optimism that the president and his party the NPP will not lose the polls.

He added, “when you were in power, we beat you over one million votes, and now that we have brought free SHS successfully, that alone could even win the seat for Akufo-Addo”.