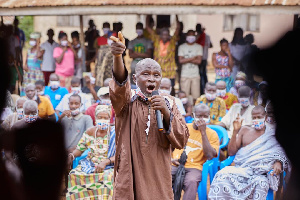 It appears the dominance of the opposition NDC party in many constituencies of the Oti Region has come to an end as residents are saying “the days of voting for symbols are long gone.”

According to residents of the Krachi East Constituency, since the constituency was created 16 years ago, the first 12 years had always been a vote for the NDC’s parliamentary candidate, Wisdom Gidisu, yet they have had little to show for it. However, after voting for Michael Yaw Gyato, the current NPP Member of Parliament in 2016, they have seen a drastic transformation in their constituency and their lives.

The residents were speaking at separate electoral areas in the constituency during an interaction with the government’s spokesperson on governance and legal affairs, Herbert Krapa, and some executives of the NPP in the Oti Region as they intensify their campaign to secure at least 5 parliamentary seats in the region.

One of such residents at Tokorano is Salifu Abdul Wahab who stressed that “The days of voting for NDC irrespective of the candidate are over.” He likened the performance of the NDC and NPP candidates with the preparation of soup saying “We have tasted two soups; one by Gidisu aka ‘Top in Town’ and another by Michael Gyato aka ‘Adwumawura’ and have realised that Gyato’s soup is nicer. Even with leftover meat (four-year mandate), he has given us a nice soup, so we are confident when we give him cow meat (another four years) come December 7th, he will prepare for us a more nutritious soup.”

He berated the former MP, Gidisu who lost to the incumbent, Gyato in 2016 for wasting 12 precious years achieving nothing for the constituency except himself. He said, “No development for 12 good years as MP. If we take Gidisu round the constituency to point out his initiatives, he will have nothing to show.”

Worst of it all, despite the high youth unemployment in the area, Gidisu sends all his investments to Hohoe in the Volta Region and other parts of the country, Salifu Abdul Wahab lamented.

Wahab, who is an Arabic teacher and aid to the Imam of the area said, even in the Zongo communities, Gidisu has lost touch with them and is unable to face them because he has constantly promised and failed them.

Another resident Dienipanim Kwesi, alleged that former MP Gidisu failed to fulfil his promise to support them put up a maternity clinic despite promising to use his common fund to do so. In the end, the community contributed to have the project done.

She indicated that “At first we did not know, If we were blind before, now our eyes have been wide opened by Mr. Gyato and the NPP. We have seen through the lies of the NDC who have abandoned us for many years but will come around only during elections to share gifts and money to lure us. Never again. We will vote massively for Gyato and Nana Akufo-Addo to do more for us.

She noted that under the visionary leadership of President Nana Akufo-Addo, the perennial water challenge has halted after the provision of boreholes for their community. “As women we owe the NPP government a lot of gratitude because our plight has hugely been reduced,” she stressed.

Diana Mohammed a nurse at Kparekpare further explained that for all the 12 years they voted for Gidisu, not once had he attempted to solve their problems. She recounted that they had to walk for close to an hour to fetch water every day. There are days when they had queued at dawn and fought over water from the only borehole in the area, however all that has ended under the NPP.

The area had bad roads and did not have network coverage and electricity, but in less than four years that the NPP took power they have been given all that. She recounted how ironic it was to see the NDC’s candidate and his team campaigning in their community one evening with lights provided by the NPP and receiving phone calls made possible by the community network set-up provided under the NPP administration.

For many residents, voting for Gidisu and Mahama will be a grave mistake, because “Gidisu has had 12 years to prove his worth, same as John Mahama who has had 8 years (as Vice President and President). What can they do now that they could not do when they had the opportunity,” Diana asked?

The Oti Regional Organiser of the NPP, Abubakar Salifu popularly referred to as Oti Abu thanked the residents for appreciating the good deeds of President Akufo-Addo and the MP, Micheal Gyato, and promised that the next NPP government will complete their roads and bring them more development.

Mr. Herbert Krapa, who has moved camp to support the NPP’s campaign in the Oti region was overwhelmed by the testimonies of the people. He urged them not to keep the good news to themselves but spread it in the whole of the constituency for others to know that it is only the NPP that can transform their constituency and the Oti region.

The Chief government spokesperson has been campaigning in the Oti region for the last couple of weeks in what has been described as an intensified final push for the seats in Oti.

In the Biakoye and Buem Constituencies, residents of Jasikan, Worawora, Nkonya among many others expressed similar sentiments about their disappointment in showing blind loyalty to the NDC and their candidates and vowed to vote based on issues and tangible development in this election.