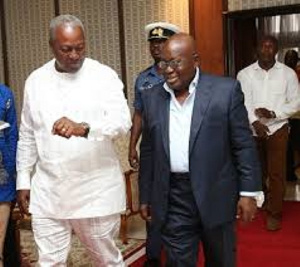 It is the third straight contest for two politicians who have known each other for well over two decades – they both served as Members of Parliament and, for quite a long time, worked together on the Foreign Affairs Committee.

But as destiny will have it, they both left their seats in 2008 to contest for the presidency in varying roles. Nana Addo Dankwa Akufo-Addo became the Presidential Candidate of the then incumbent New Patriotic Party (NPP) while John Dramani Mahama was the Vice Presidential Candidate of the opposition National Democratic Congress (NDC), whose flagbearer then Professor John Evans Atta Mills was contesting his third straight election after two successive defeats to John Agyekum Kufuor. Luck smiled on him in his third time of asking and he won the elections after a third-round in Tain Constituency.

Unfortunately, he could not live to see the end of his term.

Mr Mahama, his Vice President, took over in July 2012, a few months to the polls, to lead the NDC against NPP’s Mr Akufo-Addo in a contest that has been commonality in Ghanaians elections since then. The NPP has kept faith with Nana Akufo-Addo since then and the NDC has also maintained Mahama despite the disappointing loss in 2016 – the first incumbent to have lost after the first round – referred to as ‘one-touch’ in Ghanaian circles.

The two flagbearers have slugged it out since 2012 and December 7, 2020, elections will be their third fight, as it were. They have won one each and, obviously, lost one each though Nana Akufo-Addo has lost twice to the NDC.

The two contests between Akufo-Addo and John Mahama were very much the same with respect to their running mates. For the former president-now-contender, there is a change. His running mate in the 2012 and 2016 elections, Paa Kwesi Bekoe Amissah-Arthur, died barely months before the party’s primaries. He was said to be nursing an idea to contest the party’s presidential primaries that year. He died in the morning of Friday, June 29, 2018, at the 37 Military Hospital. Mahama eventually won the delayed primaries and was left with no option than to pick a new face for his second-term bid. After a long wait, on Monday, July 6, 2020, amid Covid-19, he made an announcement widely hailed by women’s groups across the nation. He named the Minister of Education during his tenure, Professor Naana Jane Opoku-Agyemang, as the NDC’s Vice Presidential Candidate.

Prior to serving in Mr Mahama’s government, Prof Opoku-Agyemang had headed the foremost university in a region considered Ghana’s centre of education – Central Region. She was the first female Vice-Chancellor of University of Cape Coast (UCC), becoming the first woman in the country to head a major public university. Aside from consolidating the party’s support base in the Region, whose love for the NDC ostensibly emanates from the love for indigenes Atta Mills and Amissah-Arthur, the selection of Prof Opoku-Agyemang was also well-calculated to galvanise women’s support and, remotely, challenge the debate on education to be championed by the NPP.

Indeed, her nomination ruffled feathers across the country and she was not oblivious of this.

“Your Excellency John Mahama, your singular decision to select me as your running mate has generated a whole web of responses and debates,” she observed at her unveiling at the University of Professional Studies, Accra (UPSA) on Monday, July 27.

“But importantly, it is a new focal point for girls and women; you have respected women; the women of Ghana will not forget.”

Not long after this, the NPP threw in the jabs, considering her a no-match for “consistent” Dr Mahamudu Bawumia.

“It is not the vice-presidential candidates that make the debate, it is the quality of policies,” the party’s Director of Communications, Yaw Buaben Asamoa, said.

For the NPP, Mr Mahama had struggled over the past two years “to put together a campaign team, a manifesto and a running mate”.

For their leader, Nana Akufo-Addo, going with Bawumia had been easy and received massive endorsement.

The pair lost to the Atta Mills-Mahama ticket in 2008, lost to Mahama-Amissah-Arthur in 2012 but came back strongly to beat the same ticket in 2016.

Many had attributed the 2016 victory to the Yeoman’s job done by the former Deputy Bank of Ghana Governor, starting from the landmark election petition in 2013, a fallout from the 2012 defeat. He was the witness-in-chief and the second petitioner in a legal tussle that ended in a 5-4 Supreme Court verdict.

No wonder at Akufo-Addo’s acclamation at the Alisa Hotel on Saturday, June 27, 2020, as the flagbearer of the NPP for a record fourth time, he referred to Dr Bawumia as ‘Mr You & I Were Not There’, a reference to one of the numerous jargons that Ghanaians were served with during the eight-month-long live-broadcast hearings. It is worthy to note that Akufo-Addo also referred to his running mate of 12 years as ‘Economic Prophet’, ‘Mr Digital’ and ‘Walewale Adam Smith’.

This is not lost on the incumbent Nana Akufo-Addo.

“[The elections] 2020 is between the current president and the president who was voted out in the last contest,” he said at his acclamation as NPP’s leader again.

“It is about leadership.

It is about integrity.

“It is about the performances of the two men given the opportunity by Ghanaian people to lead.

“It is about measuring records against promises.

“It is about which of the two leaders as he was in office and knows how to manage the economy.

“It is about which of the two leaders you the voter can trust to deliver.

It is about which of the two men you can trust with the future of your children.

“It is about which of the two leaders you know you can depend on in times of crisis.

“It is about which of the two leaders you believe can put in motion the necessary measures to revive and strengthen the economy, businesses and social services and build our country out of the coronavirus pandemic.”

He finally noted: “I am of the firm conviction that this nation, the Black Star of Africa, is on the brink of a decisive step into a brighter future which will provide progress and prosperity.”

Mr Mahama believes his track record far outweighs Nana Akufo-Addo’s, therefore consistently inviting him to a debate that never was.

“If the President agrees, I’ll just sit with him and we’ll all bring our papers and just talk to the Ghanaian people and show what we did with Ghc56 billion and he too can show what he’s done with Ghc140 billion,” he said in an interview on his campaign trail.

He says his “worst” corruption record is Akufo-Addo’s “best”.

One key change is the referee for the elections.

She has promised credible elections.

“Can anybody tell us at which point the Electoral Commission can rig this transparent process?” she parried accusations of scheming to ensure the re-election of Akufo-Addo.

On December 7, 2020, the race will be crucial though a common sight on Ghana’s ballot since 2012. Maybe variety is what has seen some 10 other candidates throwing in their challenge to make the race one of the highly contested.

But at the end of the day, it will be the last contest for one of the two leading candidates – Akufo-Addo and Mahama.

Election 2020: Voters in the Atebubu-Amantin Constituency queue as at 2am

Election materials yet to arrive at Lashibi in Tema West Constituency