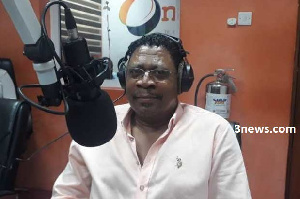 Former Chairman of the Confiscated Assets Committee, Carl Wilson has said the National Democratic Congress (NDC) won the majority of seats in parliament but a system has been used to deny them of that right.

Appearing on Frontline on Rainbow Radio 87.5Fm, he suggested Ghanaians voted in a ‘skirt and blouse’ format by retaining President Akufo-Addo for another four years but gave the majority to the NDC so they will work in the interest of the state.

Mr. Wilson said the 2020 polls showed that Ghanaians want corruption to end and in doing so, they decided to share the power between the governing New Patriotic Party (NPP) and NDC.

According to him, Ghanaians are tired of the massive corruption over the years and this is a deliberate attempt by voters to help transform Ghana.

To him, the electorates have become sophisticated and no longer vote based on the gifts given them but vote their conscience.

He said although there were some form of vote-buying, Ghanaians voted on their conscience.

Contrary to claims that the NDC won the presidential election, Carl Wilson disputed it saying Ghanaians are not ready to reelect Mr. John Dramani Mahama as president.

He further suggested if the polls went into a run-off, the president will still win because Ghanaians want to have a president from the NPP, and the majority of seats in parliament for the NDC.

advised the president to work in the interest of the country and accept the verdict of the people.

He asked him to focus on dealing with corruption because his first four years have been hit with several cases of scandals and corruption.

The President he lamented disappointed him because he failed the corruption test despite the assurances he gave Ghanaians.

He said Ghanaians would have voted for independent president but the candidates who contested as independent were not credible.

He admonished Ghanaians to maintain the ‘skirt and blouse’ approach to help Ghana develop.

When asked who he voted for, he disclosed that he voted for the incumbent president but voted for an NDC parliamentary candidate.