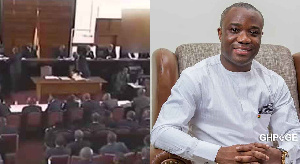 Former Deputy Information Minister under the National Democratic Congress in the John Dramani Mahama administration, in a tweet, has suggested that the judiciary system in the country on several counts has proven to be NPP bias and cannot be trusted.

The NDC has made claims of having gathered enough evidence to prove that the Jean Mensa-led Electoral Commission’s declaration on Wednesday December 9, 2020 was flawed.

The party has rejected the results declared by the Commission insisting that the figures were cooked in favour of the ruling NPP and its candidate Nana Addo Dankwa Akufo-Addo.

Amid the ongoing protests by NDC supporters and a possible repeat of the post-2012 election petition case, Felix Ofosu Kwakye has insinuated that the NDC is up for an uphill climb in court because the system is not fair.

Pointing to various legal cases and their outcomes, the politician who failed in his attempt to win the Abura Asebu Kwamankese seat maintained that justice will not be assured should they battle the NPP in court.

He made reference to the infamous Montie 3 who were pardoned by the President at the time, John Mahama after threatening to kill judges on a local radio station, Montie FM in the capital, Accra in 2016.

Radio host Salifu Maase (alias Mugabe) and his two panelists, Alistair Nelson and Ako Gunn, were sentenced by the Supreme Court to four months in jail each with an additional fine of GH¢10,000 after pleading guilty to charges of contempt.

Mentioning that the verdict was too harsh on these gentlemen, Felix added that the NPP have gotten away with even worse crimes.

Felix pointed to another case of members of the vigilante group, Delta Force affiliated to the NPP, storming the Kumasi Circuit Court and freeing defendants who were facing charges for causing disturbances at the Ashanti Regional Coordinating Council.

Reports indicated that the Delta Force, in addition, vandalized some court properties and almost assaulted the Judge, Mary Senkire who ruled that they be remanded to appear in court on a later date in 2017.

Furthermore, the politician cited a more recent case of the controversial Kennedy Agyapong saying unprintable words about a judge who granted an injunction against him without allegedly conducting due diligence.

Even though Kennedy apologised to the Chief Justice, Judges and Magistrates for his outburst, Felix believed that the law let him off the hook too easily.

He alleged that the legal system, by letting both the Delta Force and Kennedy Agyapong walk free, proved that they may hold some prejudice against the NDC. 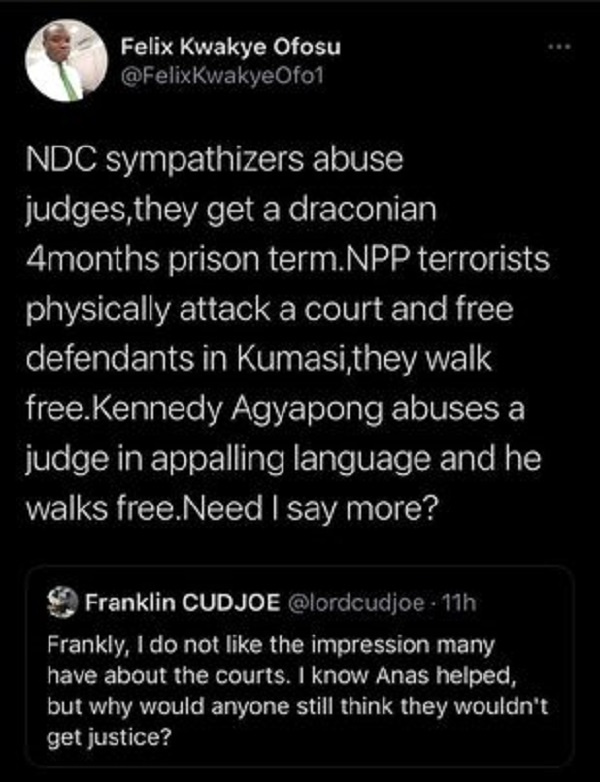