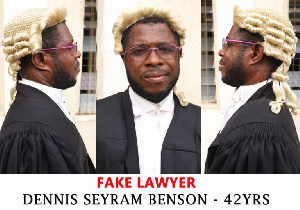 There was drama at the Kaneshie District Court in Accra presided over by Her Worship Mrs. Ama Adoma Kwakye when Dennis Benson Seyram, the man arrested in Volta Secessionists case posing as a lawyer was charged together with 21 others for treason.

In court on Tuesday, when the 21 out of the 32 of the Volta secessionists discharged earlier were arraigned following their re-arrest, the fake lawyer’s name was included.

Danis Benson Seyram was however charged together with the 21 others with four charges including treason felony.

His lawyer, Rexford Nii Nortey Lokko, therefore, drew the court’s attention to the fact that his client has never been involved in any of the volta secessionists activities except that he was arrested for posing as a lawyer

He, therefore, prayed the court for his client’s name to be deleted from that list.

Prosecution led by Assistant Superintendent of Police ASP Sylvester Asare on his part told the court that, as per the charge sheet, they have 22 accused persons and the submission that Dan is Benson Seyram, the 22nd accused person was arrested in connection of the case.

He said he was therefore at sea on the lawyer’s line of argument.

He has however been remanded together with the 21 others to reappear before the court on January 11, 2021.

Pay us before you go on break – EC temporal staff roars