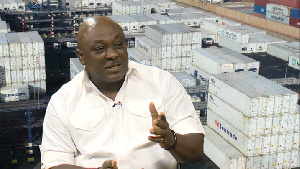 Former Deputy Minister of Trade and Industry Carlos Ahenkorah has criticised Nigeria’s “bullying attitude” that led to the closure of its land borders from August last year to December this year, and has indicated that such incidents will not be condoned under the African Continental Free Trade Area (AfCFTA) regime.

Mr. Ahenkorah empathised with Nigeria over its concern to safeguard its market and people but disagreed with the option to close its borders to trade.

“I still challenge the rationale for Nigeria to close its borders,” he stated on a live interactive programme, adding that, “they see themselves as big brothers of West Africa and can decide to do what they want to do.”

According to him, Nigeria closed its borders to flex its muscles as the regional superpower, adding that this was made possible by some loopholes in the Ecowas Trade Liberalisation Scheme (ETLS).

“The ECOWAS protocols were couched in a gentleman’s agreement by the heads of state, and there were no dispute resolution mechanisms within that framework; but the AfCFTA has corrected this mistake,” he said.

The former minister’s views were supported by the chief executive of the Private Enterprise Federation (PEF), Nana Osei Bonsu, who opined that key conflict resolution mechanisms embedded in the AfCFTA protocols will curtail such trade injustice.

“There are mechanisms that will allow businesses to report foul behaviour. In ECOWAS, Nigeria is the biggest player, so they bully; but in the continental free market, we have other competitive big players who have participated in the global village for a period and you can’t bully them,” he said, citing countries like Tunisia, Morocco, Egypt, South Africa and Kenya.

Nigeria closed its land borders in August 2019, arguing it was a safeguard measure to eliminate an alarming spate of smuggling which undermined both local production capacity and internal revenue mobilisation.

The decision however had a negative impact on the country’s traders, who are now demanding compensation from the government, according to Dr. Ken Ukaoha, president of the National Association of Nigerian Traders (NANT).

“We have even sent a memo in this regard. We are asking for compensation, especially for those who have been doing legitimate businesses across the borders,” said Dr. Ukaoha on the programme.