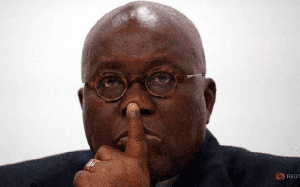 Certain persons have resolved to eliminating President Nana Addo Dankwa Akufo-Addo before the end of his second term, Bishop Elisha Salifu Amoako, the General Overseer of the Alive Chapel International has revealed.

He stated during a 31st-night watch service that halfway through his second term, there will be an assassination attempt on the president but will not be successful.

Salifu Amoako noted that President Akufo-Addo has been ordained by God and that any attempt to end his life will end in futility.

He said through food poisoning, the president will be attacked but he will survive and see through his four years.

“The Lord said pray for President Akufo-Addo because people have vowed to ensure that he does not finish his second term. He will die two and half years through and it will come through food poisoning. They will eliminate him but the Lord says he will not die before his time. He will finish whatever he has started.

“The Lord has a covenant with him and he has not established that covenant yet. There are people who have been paid monies to assassinate the old man but I cancel every demonic assassination. There is a plot to eliminate the man but he will finish what he has started,” he told the charged crowd.

He stated that a vision took him to the Bank of Ghana and Ministry of Finance premises where he saw posters of the Ken Ofori-Atta.

He, therefore, urged Ghanaians to pray for him to avert the unfortunate incidence.

“The lord took me to the bank of Ghana and whiles I was looking at the building, something happened. I saw a picture on the building. I also went to the ministry of finance and I saw the same picture there. The lord said what can you see? And I said I saw a picture of a man of the man in charge of the finances of Ghana. Here me. The lord said we should pray for Mr. Ofori Atta. If we don’t pray for him, from January up until, March, this man will die,” he added.