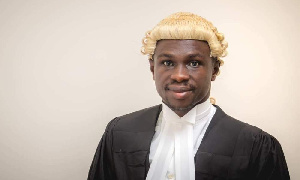 Lawyer Sammy Darko has chided Ghanaians for supporting the method used by EOCO and the Ghana Dental and Medical Council in arresting child harvesters.

Social media has been awash with condemnation of some Doctors, Nurses, mothers and social welfare workers who have been arrested for selling children and praise for the team at EOCO and Dental & medical council.

The Economic and Organized Crime Organization (EOCO) and the Dental & medical council through its investigation caused the arrest of some medical practitioners who were contacted by their investigative team who babies were sold to for GH¢30,000 and GH¢28,000.

According to him, Ghanaians need the RAW FOOTAGE in order to see how the persons involved were trapped just like some people always demand of his client Anas Aremeyaw Anas.

I see a lot of folks celebrating the Dental & medical council and EOCO arrest of baby harvesters/ trafficking. I thought they did be appalled by the entrapment method used by the team. The doctors, nurses and birth attendants were sitting their somewhere and they ENTICED and or TRAPPED them with money and they sold a baby or two to them.

This sort of method is cruel, it’s not good. You don’t trap people to sell babies to you and turn around and say they are criminals. You went to them to buy the babies, they were sitting their somewhere and doing their jobs. You actually set them up.

WE WANT THE RAW TAPE. So we see how they were entrapped. We demand justice for these innocent medical people who were merely setup.

I am so angry at EOCO and Dental and Medical Council. Ghanaians must condemn this type of trapping people and calling them criminals. It is WRONG.

Man, 24, arrested for killing friend over ¢10.00 dispute at Assin Awisem