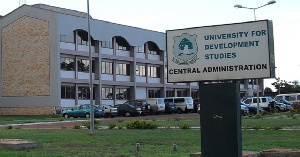 President Nana Addo Dankwa Akufo-Addo at the funeral of the late Jerry John Rawlings on Wednesday disclosed that the Rawlings family had accepted the offer to rename the University for Development Studies (UDS), after Rawlings.

Rawlings won the US$50,000 World Food Prize in 1992 for “sustainable end to hunger” and donated that money as seed capital for the establishment of what has become the first university in the Northern Region and fifth public university to be established in Ghana.

The University for Development Studies was set up as a multi-campus institution, with the main campus in Tamale.

It now has branches in Navrongo and Wa and counting.

Ironically, the idea of UDS was conceived during the Dr Hilla Limann administration, a man Rawlings overthrew in the 31 December 1981 coup.

Thus the decision to rename the UDS has always remained controversial.

Therefore, the necessary formalities will be carried out to rename the UDS as Jerry John Rawlings University for Development Studies.

Meanwhile, when the matter was reignited in 2019, Jerry John Rawlings in a statement signed and issued on Tuesday, April 9, 2019, by Kobina Andoh Amoakwa from the Communications Directorate of former President’s Rawlings’s office, expressed disinterest in the matter.

“The former President has taken particular note of the plan to re-name four universities after eminent Ghanaian personalities, including the naming of the University [for] Development Studies (UDS) after him,” the statement said.

It added: “When the proposal for the naming of the UDS was first brought to the former President’s attention by the Education Minister in 2017, he thanked the President and the government for the honour, but politely declined the offer because he had a long-standing principle not to have national monuments and facilities named after him”.

“Indeed, in November 2015 when the then government of the day offered to name the Offshore Cape Three Points Floating, Production, Storage and Offloading (FPSO) vessel after him he turned down the offer as well,” it added.