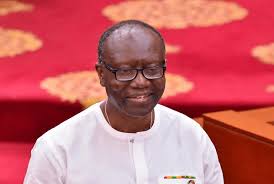 A Special Aide to Finance Minister-Designate, Michael Bediako has cleared the air on rumours that Mr Ofori-Atta has died.

Rumours were rife Monday morning about the passing of the former Minister of Finance following a release that he had traveled outside the country to further receive medical assistance due to Coronavirus complications.

But sharing a photograph, the special assistant wrote, “Honourable Minister-designate’s Delta 157 flight has landed. He’s in good spirits. He sends his regards. Regards.”

On Sunday, February 14, 2021, Ken Ofori-Atta traveled to the United States of America for a special medical review.

In a press release copied to GhanaWeb, the Finance Ministry noted that “After recovering from COVID-19 last December, Mr. Ofori-Atta has had medical complications, which doctors advise, require further interventions not currently available in Ghana.”

Ken OforiAtta was supposed to appear before parliament on Tuesday, February 16, 2021 for vetting after he was nominated by President Akufo-Addo as the Finance Minister-designate.

But due to the medical treatment, he will be receiving overseas, the leadership of Parliament has been duly notified of his absence.