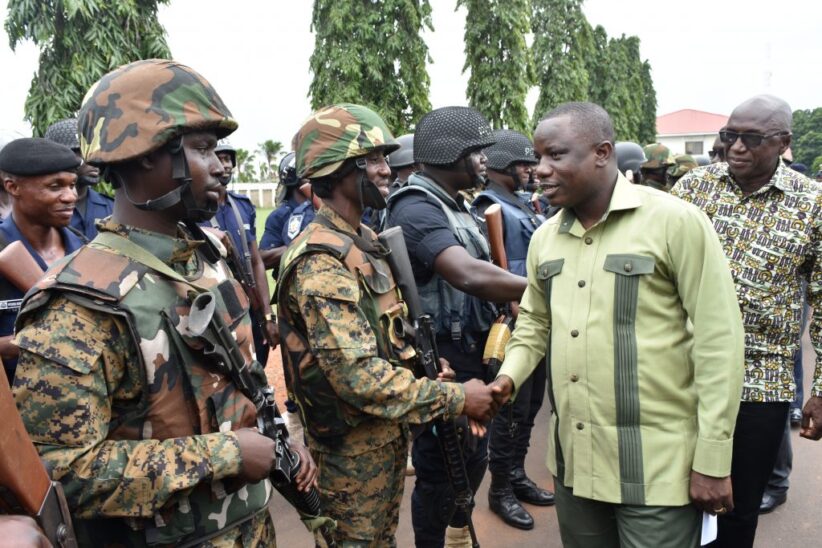 The 64 Infantry Regiment of the Ghana Armed Forces (GAF), has organised a training exercise code-named ‘Exercise Eagle Eye’ on Wednesday, 17 March 2021, at the Junction Shopping Mall, Nungua in Accra.

The exercise was aimed at enhancing the Regiment’s readiness at neutralizing possible terrorist threats in line with the Unit’s role as the counter terrorism unit and Special Forces Regiment of the Ghana Army. The exercise also afforded troops the opportunity to appreciate targets, rescue hostages, improve troop’s physical fitness and endurance.

The Deputy Director of Army Operations at the Army Headquarters, Lieutenant Colonel Darkwa Antwi-Awuah on behalf of the Chief of the Army Staff, Major General Thomas Oppong Peprah, said, the exercise was a periodic event to test the readiness of the Unit in neutralizing possible terrorist attacks on state institutions, shopping malls and crowded environments.

Lieutenant Colonel Darkwa advised troops to master their craft and principle to ensure successful executions as and when it was required. He thanked the managers of the Junction Mall for making the facility available for the counter terrorism simulation exercise.

A United Kingdom Special Infantry Officer, Captain Cliff Tweed, a member of the Joint Special Forces Group who was part of the exercise, admonished the troops to continue training to help improve their tactics and stamina.

The Second in Command at the 64 Infantry Regiment, Major Kofi Appau, who represented the Commanding Officer Lieutenant Colonel AY Owusu, said, the exercise was very significant for the Unit because of the recent spate of terrorist attacks on shopping Malls in neighbouring countries, which served as a call to alertness.