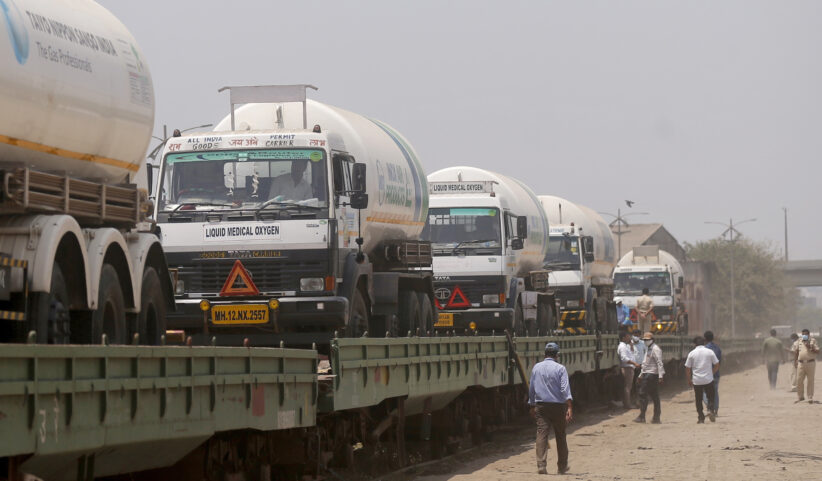 Empty tankers are loaded on a train wagon at the Kalamboli goods yard in Navi Mumbai, Maharashtra state, India, before they are transported to collect liquid medical oxygen from other states, Monday, April 19, 2021. The western Maharashtra state, which is worst hit by the coronavirus is facing a shortage of the gas used for the treatment of COVID-19 patients. India is being overrun by hundreds of thousands of new coronavirus cases, bringing a new reality for daily life in its main cities and towns. (AP Photo/Rafiq Maqbool)

Country overwhelmed by hundreds of thousands of new cases daily, bringing pain, fear and agony amid lockdowns in New Delhi and other cities.

India has been overwhelmed by hundreds of thousands of new coronavirus cases daily, bringing pain, fear and agony to many lives as lockdowns have been placed in capital New Delhi and other cities.

India’s health ministry reported 295,041 new cases on Wednesday with 2,023 deaths, taking total fatalities to 182,553. India has since the start of the pandemic recorded 15.6 million cases, the second-highest behind the United States.

Newly reported cases have exceeded 200,000 each day for a week – with people being infected faster than they can be tested.

“This time, infection is spreading so fast that people are not getting time to get medicines. Many people are dying before we can get a test report,” said Dr SK Pandey of Ram Manohar Lohia Institute of Medical Sciences in Lucknow, capital of the northern state of Uttar Pradesh.

Many have blamed politicians for allowing superspreader events such as mass religious gatherings and election rallies to take place.

Religious leaders and hundreds of thousands of devout Hindus descended on the banks of the Ganges River in the northern Indian city of Haridwar last month for the Kumbh Mela (pitcher festival). They believe that a dip in holy water will wash away their sins and prevent rebirth.

One prominent Hindu religious leader died of COVID-19 shortly after.

Tens of thousands of farmers demanding repeal of new agricultural laws have been camping on the outskirts of the Indian capital in crowded tents and makeshift townships since November.

Modi tried to boost spirits in a nationwide address on Tuesday night by saying the government and the pharmaceutical industry were stepping up efforts to meet the shortages of hospital beds, oxygen, tests and vaccines.

But, he admitted, the “surge in infections has come like a storm, and a big battle lies ahead”.