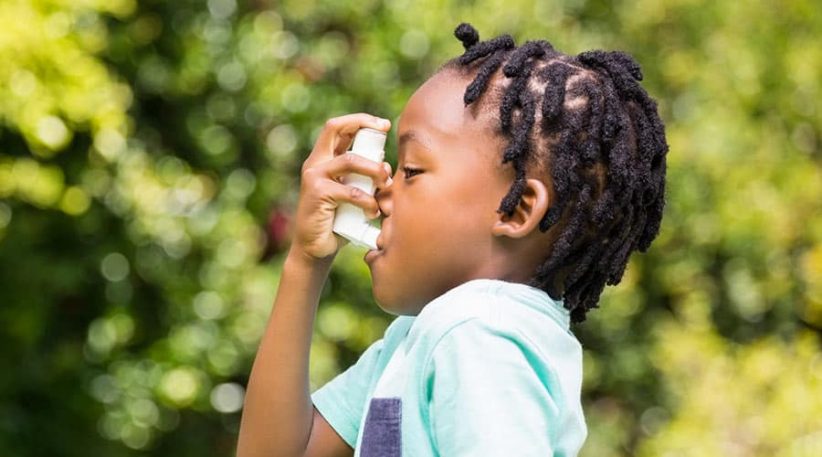 Asthma is a non-communicable disease (non-contagious disease) that affects the breathing tubes (the airways within the lungs). It can have significant impact on affected individuals.

In children living with asthma, many intrinsic factors mainly inflammation (swelling) can cause the breathing tubes to fill up or become plugged, thus making it difficult for them to breathe out because air cannot move freely out of the breathing tubes.

People living with asthma mainly struggle to breath out (expiratory air flow limitation). Although asthma is not a genetic disorder, it may run in some families.

For example, a parent living with asthma may also have children with asthma. Sometimes, it may be an aunt or uncle or the first cousins. In childhood, more males have asthma compared to females.

The common risk factors for developing asthma include a positive family history of asthma, male gender and a person with allergies. However, there are some children with asthma who have no known family member living with asthma. The environment in which a child lives also plays a major role in their long development of asthma or otherwise. In some children, their asthma symptoms begin to show only when they move into a new environment e.g., moving into a new house in a new neighbourhood, going camping or changing schools. In addition, children who live in farming communities where there is a lot of green vegetation cover also have a lower risk for developing asthma.

Worldwide, nearly 339 million people are currently living with asthma. Asthma commonly begins in childhood, however, it may also begin later in life e.g. in adolescence or in adulthood.

Results from large-scale research conducted in Africa nearly two decades ago showed an increasing prevalence of asthma in Africa, especially among young people. One in 10 adolescents between 13 and 14 years have asthma.

Urbanisation is a major driver for the rising prevalence of asthma in Africa, especially among people living in urban areas. Some face major socio-economic challenges such poor housing (urban slums), indoor and outdoor exposures to pollutants such as smoke from cooking fuels, pollution from industrial sites, pollutants from motor vehicles, dust and other open fires.

Children living with asthma commonly have the following signs:

There are some factors that can make asthma symptoms worse, these factors are also called triggers and they include exposure to smoke indoor or outdoor, dust, exercise, cold weather conditions, upper respiratory tract infections, close contact with pets, strongly scented items including insecticides, perfumes and spices.

Children with respiratory symptoms must be taken to see a doctor. The doctor will help confirm that the symptoms the child has are consistent, based on history taking and physical examination and also help to confirm the diagnosis of asthma.

When the diagnosis of asthma in a child is made, the doctor will arrange for an educational session for the child and the family, especially caregivers/parents.

The doctor will also discuss how the child’s asthma can be managed effectively and help the family to set goals that can be achieved based on the treatment offered.

In addition, the doctor will also discuss how asthma attacks (exacerbations) can be managed at home and when to take the child to the emergency room, especially when the symptoms continue to persist.

Lastly, the doctor will discuss how best the child and their family can effectively use an asthma action plan, a written information that teaches what to do for the child when asthma symptoms worsen or when the symptoms improve.

First is the emergency medication which is also called a reliever, this must be carried by the child at all times including school and used when the child feels that his/her asthma symptoms are worsening. Reliever medications only act short-term and they cannot be used to treat asthma or improve asthma symptoms in the long-term.

Any changes to controller treatment will be done by the doctor who takes care of the child. Children can use their inhalers more effectively together with a plastic chamber called a spacer device.