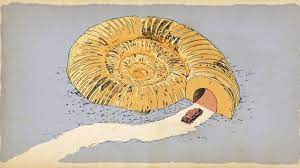 The grand metropolises of 21st Century civilisation will leave a geological legacy that will last for millennia, but as the author David Farrier writes, some things will endure far longer than others.

It seemed as though the whole world had been buried in concrete. Perhaps it was jetlag, but the view was dizzying: the city, pouring away to the horizon in every direction. Shanghai is one of the world’s largest metropolises. From the viewing platform of the Shanghai Tower, the second tallest building in the world, it looked endless – a wave of skyscrapers rippling outwards, fading to a blue blur of residential blocks in the far distance.

The modern cityscape is as much geological as it is urban. If Shanghai is a concrete desert, New York is the original canyon city, its skyscraper-lined streets forming deep valleys of the kind that, in the past, only great rivers could create over thousands of years. In a late essay, Virginia Woolf pictured herself swooping like a bird over the Hudson estuary, past Staten Island and the Statue of Liberty to the concrete chasms of Manhattan. “The City of New York, over which I am hovering,” she wrote in 1938, “looks as if it had been scraped and scrubbed only the night before. It has no houses. It is made of immensely high towers, each pierced by a million holes.”

The first cities replicated the environments that once-nomadic people depended on, concentrating shelter and sustenance in one place. The metropolis of the present offers its inhabitants the whole planet in microcosm. As the author Gaia Vince writes, the buildings and infrastructure of the urban landscape simulate “the high view of mountains, the protection of dry caves, the fresh water of lakes and rivers”.

If cities have a geological character, it begs the question of what they will leave behind in the stratigraphy of the 21st Century. Fossils are a kind of planetary memory of the shapes the world once wore. Just as the landscapes of the deep past are not forgotten, how will the rock record of the deep future remember Shanghai, New York and other great cities?

How to regrow a wrecked coral reef