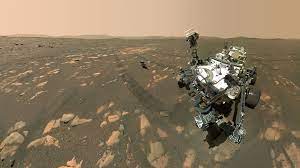 Humanity has sent around 30 spacecraft and landers to the Red Planet since the space age began. Now, we know which microbes might have survived the trip, says geneticist Christopher Mason.

Trundling across the surface of Mars as you read this is a remarkable machine. Perseverance – the car-sized rover that safely touched down on the Martian surface on 18 February this year – might only have a top speed of less than 0.1 miles per hour (152m/hr), but it carries a wide range of tools, instruments, and experiments that have already made some groundbreaking achievements.

Included on board the 10ft-long (3m) rover is a machine that has turned the thin, carbon dioxide-rich Martian air into oxygen and a helicopter the size of a tissue box that made the first-ever powered, controlled flight on another planet. The helicopter, called Ingenuity, has now made three successful flights, each longer and higher than the last.

But did anything else come along for a ride with all this hardware? Could a trace bacterium or spore from Earth have accidentally been carried into space and survived the trip to make its new home on Mars?

Although Nasa and its engineers in the Jet Propulsion Laboratory (JPL) have precise and thorough protocols to ensure their spacecraft are free from any organisms that might inadvertently hitchhike on a space mission, two recent studies highlight how some organisms might have survived the cleaning process and also the trip to Mars, and also how fast microbial species can evolve while in space.

First, let’s start with the process that was required to build the Perseverance rover, as well as most spacecraft made in JPL’s spacecraft assembly facility (SAF). There, spacecraft are painstakingly built one layer at a time, like an onion, with everything cleaned and sterilised before it is added. These methods ensure that almost no bacteria, viruses, fungi, or spores contaminate the equipment to be sent on a mission.

NPP to regulate conduct of flagbearer hopefuls with strict code