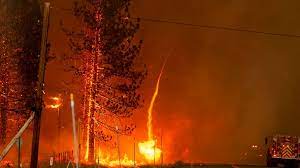 When a wildfire reaches epic proportions, it changes everything around it – even creating its own weather. Scientists around the world are racing against time to understand them.O

One afternoon in June 2017, villagers in Pedrógão Grande, a small municipality in central Portugal, saw a column of smoke about 1m (3ft) wide approaching from several miles away to the north. Firefighters were on the scene within minutes, but by that point the wind speed around the fire had accelerated and the smoke plume had expanded to nearly a kilometre (0.6 miles) wide.

As the afternoon went on, the fire gained speed and heat rapidly, and the plume of smoke grew wider and taller until a dark, thunderous cloud started to form, high up in the atmosphere. Far from being a welcome sign of rain, this was a highly unusual kind of thundercloud.

Over in Washington DC, Mike Fromm, a meteorologist at the US Naval Research Laboratory who collaborates with Nasa, was tipped off by an Australian scientist about the news emerging from Portugal.

Using global satellite imagery and data, Fromm suspected the large cloud – now appearing over the middle of the country – was a pyrocumulonimbus, or “pyroCb”. It was a first for Western Europe since records began, although it would take months longer to confirm it with the help of Portuguese meteorologists. A pyroCb is a thunderstorm generated by fire that creates its own positive feedback loops, including winds, lightning and sometimes deadly downdrafts that spread the fire outwards.

“It’s a symptom of something extremely dangerous happening on the ground,” says Fromm. “Because to get a cloud like this, you need some crazy intense fire behaviour. A pyroCb is at the very limit of how high, cold and opaque a cloud can get, and means that the fire which is causing it is at the extreme limit of intensity too. And that means the fire itself is more intense, more unpredictable, and more hazardous than fires in a more lazy state.”

Zambia’s parliament has been dissolved exactly 90 days before the upcoming general election.

The myths that hint at past disasters.