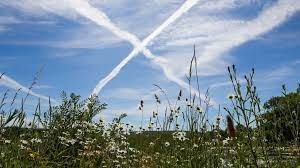 From switching the fuel they use to changing flight plans so they produce fewer contrails, airlines are searching for ways to cut their impact on the climate.

This is why flying individuals, or goods, around the world is so very energy intensive – and so terrible for the climate. Just one flight can emit as much CO2 as many people do in a year, and the number of flights globally is expected to grow at an alarming pace over the coming decades.

Compared to other sectors, aviation is a relatively small contributor to global greenhouse emissions, but it is also one of the fastest growing. Between 2000 and 2019, there was a 5% average rise in flights per year; by 2019, it accounted for 2.5% of the world’s CO2 emissions.

With Covid-19, flights and passenger numbers plummeted, but the number of people flying is expected to return to 2019 levels within a few years and continue to grow. All this means that we need to start doing far more on aviation emissions, and fast. But bar gradually rising efficiency in planes, little progress has been made so far on how to actually decarbonise aeroplanes

Everything, even if it’s more into the future, needs to start today and we need to do it swiftly – Maarten van Dijk

If the world hopes to limit global warming by meeting the ambitious cuts in carbon emissions set out in the Paris Agreement on climate change, aviation will need to move away from fossil fuels completely in the long term. Companies like Airbus have grand plans to develop hydrogen planes within 15 years, for example, but what can be done in the shorter term to curb the aviation industry’s impact on the climate? Can we find alternative fuels to burn in our aircraft or even change the way aircraft fly so they are kinder to the planet?

In 2010,  a venture founded by Dutch airline KLM and several other partners began one of the first efforts to develop more climate-friendly alternatives to conventional kerosene.

Little was known at the time about how to do this, says Maarten van Dijk, one of the three and managing director of SkyNRG. “But we knew that whatever happened, someone needed to get the fuel and get it into an aircraft and sell it. So that’s what we started focusing on.”

How your name affects your personality.