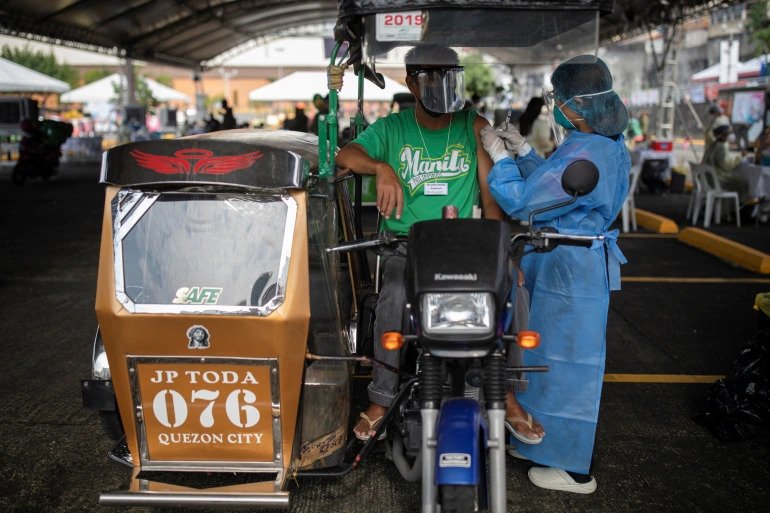 The Philippine government has banned unvaccinated residents of the capital Manila and surrounding districts from public transport amid a new surge of COVID-19 cases due to the Omicron variant.

In an order published on Wednesday, the country’s transport secretary, Arthur Tugade, said the “no vaccination, no ride” policy covers all domestic public transport to, from and within Metro Manila.

Operators of public transport, including land, air and sea, “shall allow access or issue tickets only to fully vaccinated persons”, and passengers are required to show proof of their identification and vaccination status.

The order added that people are considered fully vaccinated two weeks after receiving their second dose of the COVID-19 vaccine, or two weeks after getting a single-dose vaccine.

Earlier, the mayors of Metro Manila agreed to limit the mobility of unvaccinated people in the capital, including a ban from entry to shopping centres and other facilities, although some legal experts questioned the constitutionality of the restrictions.

President Rodrigo Duterte had drawn criticism after he ordered the arrest of unvaccinated people who will violate stay-at-home orders aimed at curbing the spread of the virus, which is triggering a new wave of record-breaking cases since the start of the year.

As of January 10, an estimated 52.86 million Filipinos were fully vaccinated, according to the government, equivalent to 48 percent of the country’s total population of 110 million.

The transport department’s new order said any violations “shall be considered a violation of applicable general safety and health provisions” imposed in the country since the pandemic.

There are some exemptions to the order, including people with medical conditions who cannot be vaccinated and individuals who are assigned by their household to buy essential goods outside their residence.

However, the order has drawn strong opposition. In a statement, an opposition and rights group leader Renato Reyes called it “patently illegal and absurd”.

“Half the population will not be allowed to move now? How about people who are going to their vaccination sites? They are expected to walk?,” he wrote on social media.

“You’re discriminating the movement of people who take public transportation,” he said. “What about those in private vehicles? How come they’re allowed to go around the city without any checks,” the group’s director Ira Cruz was quoted by ABS-CBN website as saying.

Since the pandemic hit the Philippines in 2020, Duterte has imposed measures that have been questioned by critics as too restrictive and not based on data and science.

Duterte had previously threatened to arrest those who violated the country’s lockdown measures, and warned those who refused to get vaccinated that they would go to jail amid the spread of Delta variant last year.

When the government first imposed lockdowns in the country in April 2020, Duterte also warned that he would order the country’s police and military to shoot dead anyone “who creates trouble”.