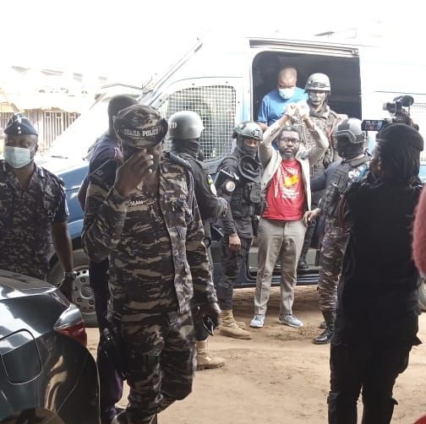 A leading member of the #FixTheCountry Movement, Oliver Barker-Vormawor, has been charged with treason felony.

This is an offence provided for in section 182(b) of Ghana’s Criminal offences Act.

This provides; “Section 182—Treason Felony. A person is guilty of treason-felony and shall be punishable as for first-degree felony who —

b) prepares or endeavours to carry out by unlawful means any enterprise which usurps the executive power of the State in any matter of both a public and a general nature.“

Prosecutor DSP Sylvestre Asare on Monday informed the court the Ashaiman Police received a complaint that Mr Barker-Vormawor was inciting some persons to overthrow government.

He said investigations had revealed that this incitement subsequently took place on social media. This he said formed the basis of the charge against the accused person.

Lawyers for Mr Barker-Vormawor led by Anthony Akoto Ampaw urged the court to grant him bail.

They accused the police of defying a Supreme Court ruling that stated that an accused person must be put before the court within 48 hours with weekends inclusive.

DSP Asare in a sharp rebuttal however pointed out that the Police over the weekend reached out to the Chief Justice hoping to get a court to hear the matter. All efforts, he continued provided futile.

The judge hearing the matter Eleanor Barnes remanded the accused person into police custody pointing out that the nature and severity of the crime meant the court cannot grant bail.

He is expected to reappear on Monday, February 28.