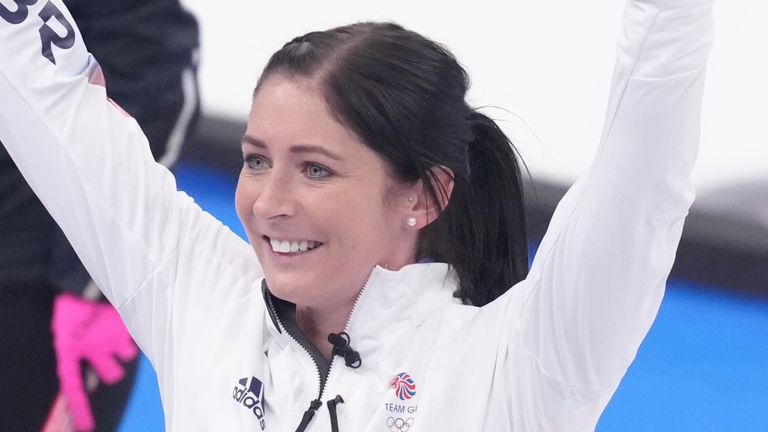 At the fourth attempt, after heart-breaking near misses and career-saving surgery on an arthritic hip, Eve Muirhead finally has her Olympic curling gold medal.

“Without these girls being so strong, this dream would not have come true,” said Muirhead, who was in tears on the podium.

“They helped me become a better curler, and a better person.

“Together we are a very, very strong unit and I think today we proved that.”

The Great Britain team of Muirhead, Vicky Wright, Jen Dodds and Hailey Duff overwhelmed Japan 10-3 in Sunday’s final – a routine surge to victory compared with the twists and turns of the previous rounds, and with Muirhead’s Olympic past.

After four defeats from nine in the group stage, GB only scraped into the semi-finals courtesy of other results going their way and the tiebreak of the ‘draw shot challenge’.

In the last four they came through a gripping, stomach-churning match against Sweden – a win third time lucky for Muirhead, who had lost Olympic semi-finals in 2014 and 2018.

“Nobody likes to do it the easy way, do they? So we thought we would do it the tough way,” the 31-year-old said.

“As a team we showed a lot of resilience. We are very strong and very fit. And I think being physically fit helps you be mentally fit.

“As a team, there were moments where you doubt yourself. You doubt whether you will make those play-offs, but we never gave up. We just didn’t give up, and I think that shows the incredible strength of this team.”

Howie was in Beijing to witness the latest triumph as a BBC commentator and Muirhead credited her former coach, mentor and fellow Scot.

“It’s funny because several months before I came here I was getting interviewed for a documentary about Rhona’s 20-year anniversary,” said Muirhead, who was 11 when Howie won gold.

“To have this moment now and know that I followed in Rhona’s footsteps and have this gold medal around my neck, is something very, very special.

“I can’t thank Rhona enough for all of her help and support through the years to help me get here.”

Muirhead, who became the youngest ever Olympic skip at just 19, had hip surgery in 2018 having played in pain for several years and admitted before the 2022 Games she had not known whether she would return to curling afterwards.

Her Scotland team only managed eighth at the World Championships last year, putting her Olympic place in jeopardy.

Nine players were put into a squad selection process as a result of the disappointing finish but the current quartet, plus alternate Mili Smith, emerged.

The Olympics has been 25-year-old Duff’s first major global competition. Dodds has played 22 matches in Beijing after finishing fourth in the mixed doubles with men’s skip Bruce Mouat, while Wright is a nurse who returned from her training to work full-time on the frontline during the Covid-19 pandemic.

“I was working full-time up until 2019 when I joined Eve’s team,” said Wright, who Muirhead described as the “mother of the team”.

“Then I dropped to one hour a week. Then the Covid pandemic hit in 2020, and I went back to work full-time.”

She was working on the wards alongside her training as recently as January before taking time off for the trip to China.

“I took eight weeks off, so it’s back to work when I get back from here,” she said.

While it may have been a disappointing Games for TeamGB overall – this gold and the silver won by the men’s curlers on Saturday their only medals – the final day will live long in the memory of Muirhead and her rink.

“I’m so proud of the girls, how we played today, because if you can bring your A-game in the Olympic finals that just shows how great and what fantastic abilities we all have,” Muirhead said.

“To stand on the podium and get that gold medal around your neck is honestly a moment I’ll never forget.”