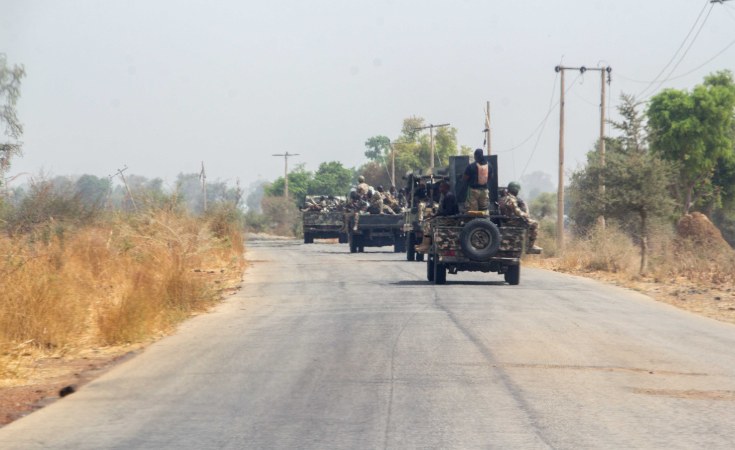 There have been two contrasting narratives about the killings. While some say the killings were done by the gunmen, others accuse the Nigerian military of targeting civilians in retaliatory attacks on the gunmen. The second narrative led to the hashtag #OrluIsBleeding which trended on Twitter on Monday and early Tuesday.

Two residents PREMIUM TIMES spoke to, however, accused the gunmen of carrying out the attacks.

A resident, who asked not to be named for fear of attacks, told PREMIUM TIMES that heavy shootings began when military personnel engaged the gunmen in a battle.

“The gunmen became enraged and started shooting sporadically. They were in a gun battle with the soldiers from Sunday morning till evening,” the source told this newspaper Monday night.

The gunmen, believed to be members of ESN, the militant wing of the outlawed Indigenous People of Biafra (IPOB), were said to be on a manhunt for members of Ebubeagu Security Network, who reportedly arrived in the area last Saturday.

The gunmen, it was learnt, were infuriated by the presence of the members of the security outfit in the area.

Another resident of the area, Kosiso Agu, told PREMIUM TIMES that members of the community remained indoors on Monday, 24 hours after the attack, out of fear of being attacked by the gunmen.

“They killed so many people. It started while we were in the church, but we had to run back home,” Ms Agu said.

A Facebook user, Success Obum, who posted a video clip of the incident, described the attack as heartbreaking. In the clip, the army was accused of attacking civilians.

In the video clip, posted by Mr Obum, residents were seen scampering for safety while sounds of gunshots rented the air. Some residents were also seen weeping and lifting the corpses of their loved ones killed in the attack.

“This is the popular Okwu Aki or Inland Guest house (which) has been razed down by the military forces. They have been shooting since morning. Shooting and killing innocent people, burning peoples’ shops and properties. That’s what we witnessed today. So, we are not happy,” a voice was heard speaking in the clip, apparently shot on Sunday.

“How can government deploy its security agencies to destroy people celebrating their Easter. We are sad. Since Night, nobody has slept in this area. Nigeria military forces (are) shooting every damn thing they see,” the voice added.

The police spokesperson in Imo State, Michael Abattam, did not respond to calls and a text message seeking comments from him.

Reacting, the Nigerian Army said its troops from the 34 Artillery Brigade killed a member of IPOB during the attack in the area.

Army spokesperson Onyema Nwachukwu disclosed this in a statement on Monday.

He said troops were on their routine patrol when they encountered the IPOB members firing gunshots at the Banana Junction of the area and challenging the soldiers.

Mr Nwachukwu said the members of the outlawed group were enforcing the suspended sit-at-home order.

“The IPOB/ESN criminals, on sighting the troops, withdrew in a blue Toyota Highlander towards Ihioma Community for reinforcement.

“In the firefight that ensued during the operation, one of the criminals was taken out, while others fled in disarray,” Mr Nwachukwu said.

The army spokesperson accused the gunmen of seeking to whip up public sentiments by circulating “a doctored video” on social media to allege the complicity of the military.

“This propaganda should be disregarded in its entirety,” he said.

Mr Nwachukwu said the troops were combing the area to track down the fleeing suspects.

Attacks by armed men have increased in the South-east in recent times. The attacks often target security agencies and government facilities.

The latest development comes three days after gunmen attacked a polling unit where the Continuous Voter Registration Exercise was being held in Ihitte Uboma Local Government Area of the state.

An official of the Independent National Electoral Commission (INEC), Anthony Nwokorie, was killed in the attack. INEC has suspended the registration exercise in the local council area following the attack.

IPOB, an outlawed group, has been linked to the deadly attacks in the South-east. But the group has repeatedly denied its involvement in the attacks.

The separatist group is leading an agitation for an independent state of Biafra to be carved out from the South-east and some parts of South-south Nigeria.

The leader of the group, Nnamdi Kanu, is currently detained in Abuja where he is facing trial for treason.