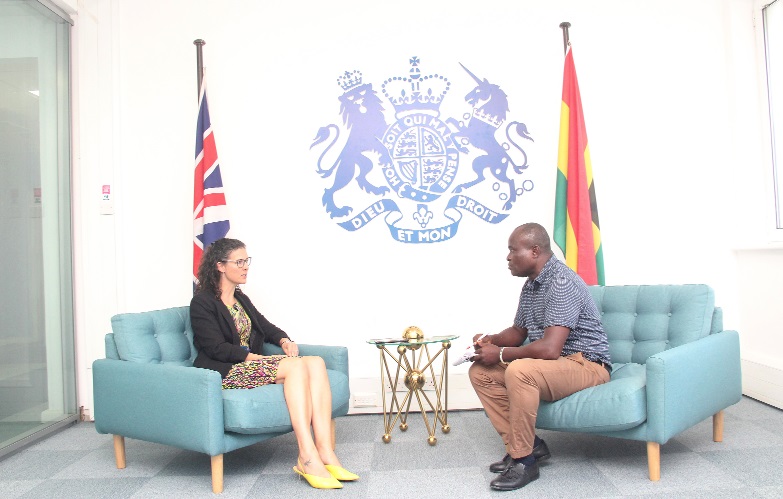 She said given the existing relations between the two countries, the UK would continue to support Ghana to bounce back from the pandemic, which had had devastating consequences on economies across the world.

“There are particular sectors where Ghana’s government has urgent priority to ensure economic growth and job creation. So the sectors we are focusing on include pharmaceutical, garments and textiles, automotive and agro-processing,” Ms Thompson told the Daily Graphic in Accra yesterday on the sidelines of a press conference.

She did not provide numbers to back her assertion, as she did not have them ready.

Moreover, she said, the UK government would continue to work with the government of Ghana and its private sector on the economic conditions that would encourage international investment in the sectors mentioned and also the growth of the domestic industry that would help create the jobs that Ghana needed.

Ms Thompson said during the COVID-19 period, the government of Ghana dealt with what was critically a difficult pandemic, resulting in people commending it for the steps it took to contain the spread of the virus.

Frequently, she said, her visitors told her that they were impressed by the discipline among Ghanaians as they wore their face masks.

On education, she indicated that the UK Prime Minister, Boris Johnson, had a long-standing and deeply held personal commitment to support Ghana’s educational sector.

That, Ms Thompson said, was being done at all levels, such as policy development and implementation, support for the Ministry of Education to deliver the reforms it had identified and the training, with the support of the government of Ghana and the University of Cape Coast, of 70,000 teachers, so that children in school would get quality education.

During the pandemic, she said, the UK supported Ghana through remote learning, provision of content through radio and the running of programmes that saw teachers in urban centres providing lessons for children remotely to keep them learning.

In the area of security, the British High Commissioner said there was a long-standing partnership between the UK and Ghana, and that this year “we are looking to support Ghana’s security and defence forces to support regional security efforts. This will build on the President’s strong position against coups in the subregion”.

Regarding equipment, Ms Thompson explained that the two countries recently signed a contract for the supply of Huskie armoured vehicles to Ghana, which would be delivered soon, as well as the provision of counter identification (ID) equipment.

She said the UK had supported over 20,000 households in Ghana with cash transfers to enable them to buy food and send their children to school.

On the current Russia/Ukraine issue, she said the war was a war of choice, saying Vladimir Putin, without provocation, decided to attack a sovereign country.

“There is increasing evidence of crimes being committed by Russian troops in Ukraine. We have seen them attacking apartment buildings, targetting hospitals (a maternity hospital); we have seen them repeatedly refusing to allow civilians to leave centres of hostilities, despite humanitarian corridors being opened.

“So the UK is very clear that Russia is acting in contravention of the UN Charter, international humanitarian laws and we are very glad that the international community is already collecting the evidence, so that when the time comes, the International Criminal Court will be able to decide what crimes have been committed and to make sure those who are responsible have to account,” she said.

Undoubtedly, she said, the war was having an effect on Ghana, just like the UK and other countries, as, for instance, there had been increases in the prices of fuel and food.

She said the UK would continue to support Ukraine for the resilience its people were showing and also support their needs.

The UK, she said would love to see a diplomatic solution to the war and condemned the action Russia had taken against a sovereign state.

For her part, the Deputy Head of Political at the British High Commission, Lara Hampshire, said as the Lead on the UN Security Council and multilateral matters, she had the opportunity of going to New York to meet not only the UK Mission but also its Ghanaian counterpart based at the mission in New York.

NPP affirms April 28 to May 2 for constituency elections