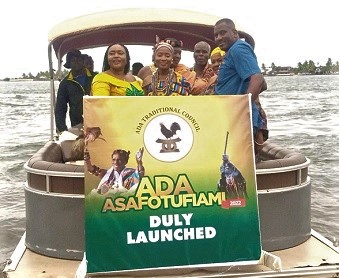 Asafotufiami commemorates the bravery of the ancestors and founding fathers who fought tirelessly and sacrificed to establish Ada.

The festival has become one of the highly anticipated festivals in the country and attracts thousands of patrons.

This year’s edition, which is the 85th, is on the theme: ‘Uniting the Ada State through our cultural heritage and use of our natural resources’

Activities to be undertaken as part of the festival are clean-up exercises, concerts, boat racing, traditional drumming and dancing, a football competition, a volleyball competition, a grand durbar of the chiefs and the people of the area, as well as a special Sunday thanksgiving church service.

Launching the festival, the District Chief Executive for Ada East, Sarah Dugbakie Pobee, called on natives of Ada to use the festival to partner the assembly to bring development to the area, since development was a shared responsibility.

The Director, Marketing and Sales, Graphic Communications Group Limited (GCGL), one of the sponsors of this year’s festival, Franklin Sowa, said three years ago, his outfit joined the partnership and helped to lift the Asafotufiami Festival to the current level.

He said as a media organisation dedicated to creating concepts and amplifying them to the world, the GCGL regarded the partnership as a huge opportunity to highlight the rich things in Ghana, including the Asafotufiami Festival, to the rest of the world.

“As a brand that lives by truth and accuracy every day, we are committed to selling this truth to the rest of the world,” he said.

Mr Sowa urged indigenes of Ada, both home and abroad, and the rest of the world to log on to GraphicOnline from August 4 to 11 and be updated on every bit of the Asafotufiami Festival

The Chairman of the McDan Group and Electrochem Ghana Limited, Daniel McKorley, in a speech read on his behalf by Ferdinand Appiah Boachie, said the festival continued to provide ample opportunities for the people to revive ancient traditions and also created a huge platform for the chiefs and the people to display thier rich culture.

“During times like this, kinship and affinity relations are also reaffirmed, friends and people with familial ties reunite and bonds are strengthened to keep us united as a people.” he said.

The Mankralo of the Ada State, Nene Agudey Obichere, who is also the Chairman of the 2022 Asafotufiami Festival Planning Committee, said the heroic traits and achievements of the forefathers in securing for the people a homeland, with all its endowments, led to instituting the Asafotufiami Festival to celebrate their sacrifices and indicate to the current generation and those unborn to live their lives as a sacrifice to others.

He said the festival had grown to gain recognition as one of the best in the country, saying the Greater Accra Regional Minister, Henry Quartey, had made reference to the festival as the most preserved eventful heritage that was left for Ga-Dangmes.

“We are proud of this heritage, but we have to work harder to maintain and improve what we have had from the generations before us for posterity. The only enemies are division, lack of appreciation of one another and forget that in spite of our differences, we must find a common ground to forge ahead and pursue our common objectives and aspirations,” he said.

The Member of Parliament for Ada, Comfort Doyoe Cudjoe-Ghansah, said as part of her contribution towards the festival, she had made available 300 streetlights aimed at lighting communities within the constituency to provide security.

COVID-19 vaccination: Parliament select Committee on Health embarks on nationwide campaign to get all Ghanaians vaccinated