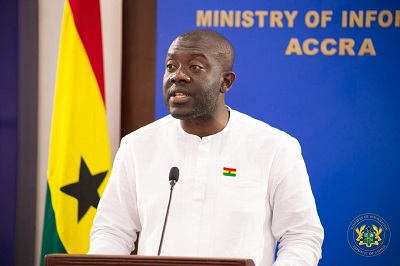 It said it had been compelled to approach the IMF because the COVID-19 pandemic had depleted the buffers, throwing the economy into an 11 per cent deficit, against the regulated five per cent deficit level.

The Minister of Information, Kojo Oppong Nkrumah, gave the explanation in an interview with the Daily Graphic yesterday to throw more light on why the country has approached the IMF to support the government’s economic programme.

He said the Russia-Ukraine war had also added a cost of living crisis of rising fuel and food prices.

“The COVID-19 cost us an unprecedented 11 per cent deficit to fight — when we had legislated not to do more than five per cent. It eroded our buffers and even added more debt,” Mr Oppong Nkrumah said.

“The war has added a cost of living crisis of fuel prices, high food prices and high finance costs at a time when we haven’t recovered from the economic impact of the COVID-19.

“That is why half of the world’s countries (including Ghana) are asking for support from the IMF,” the minister said.

A team from the head office of the IMF in Washington, DC, USA, will be in Ghana this week to start preliminary discussions with the Ghanaian authorities.

Last week, the country indicated to the IMF its intention to seek balance of payment (BoP) support.

The IMF Country Office has confirmed receipt of the indication and pledged to support the country in its 17th programme with the fund.

Generally, Ghana’s foreign reserves have dried up following a halt in economic activities and economic earnings, forcing its local currency to depreciate.

In return, the country is likely to make some concessions that will be agreed upon after negotiations.

Mr Oppong Nkrumah expressed optimism that the negotiations would not result in biting consequences, as many had suggested.

He said in 2018, the government had negotiated a one-year extension of the 2015-2018 IMF programme and it ensured that what was most important to Ghanaians were protected.

“In 2021, as part of seeking to rebuild our buffers, we negotiated about $1 billion from the IMF and again we were able to ensure that what was important to Ghanaians were not sacrificed,” he said.

He said based on its track record of protecting things most important to the economy and the people, such as the free senior high school programme, in its last two negotiations with the fund, the government was optimistic to achieve a similar feat.

“Negotiations are about to commence, but the history of our last two negotiations has proved that when you put before the fund a clear programme that shows it how you are working to improve on the economy and how you are working in a disciplined manner to avoid any excesses, it doesn’t have to impose extremely harsh conditions on you,” the minister said.

“That is why we are optimistic that based on our recent track record, it will lead to a situation where we will be able to protect the things that are most important to the Ghanaian economy and the people,” Mr Oppong Nkrumah said.

The Information Minister said primarily the downgrade of the country after the fights in Parliament over the budget and the E-Levy meant that Ghana had limited access to international capital markets to shore up reserves and buffers in such tough times.

He said any country that already had some buffers could use them to respond.

“So, for example, people want to see the government reduce fuel prices, provide subsidies, among others. But remember we have already used our buffers in the first COVID-19 programme, so we don’t have much to respond on our own,” he stated.

“And that is why the President does not subscribe to those who have argued that we could take our time and find domestic ways of dealing with this,” he explained.

He said Ghanaians were suffering and the President could not keep waiting for domestic revenue mobilisation, and so “the government is going to resort to getting BoP from the IMF to support the economy and help alleviate the second round of suffering the Russia-Ukraine war has imposed on the people”.

Providing highlights to events leading to a relapse for an IMF assistance, Mr Oppong Nkrumah said between 2017 and 2019, the performance of the economy was picking up and the evidence for the ordinary Ghanaian was that gradually things were getting better and moving faster, with inflation and interest rates coming down.

He said during the period, more people got jobs in the public sector and the government found some money to invest in programmes that mattered to the people.

“The good economic performance we saw and a lot of things we were able to do during the heightened COVID-19 pandemic era were because we had successfully built our buffers and reserves and strengthened the economy from 2017 to 2019,” Mr Oppong Nkrumah said.

He said after the 2020 COVID-19 response, rebuilding of the buffers started, with the economy rebounding last year.

However, in February this year, a second crisis, the Russia-Ukraine war, hit and impacted the economy.

“That war is causing a lot of hardships for people because it is characterised by high food price, fuel crisis and finance crisis,” the Information Minister explained.

He said the government, therefore, had to do more to alleviate the second round of suffering posed by the Russia-Ukraine war, hence the search for support.