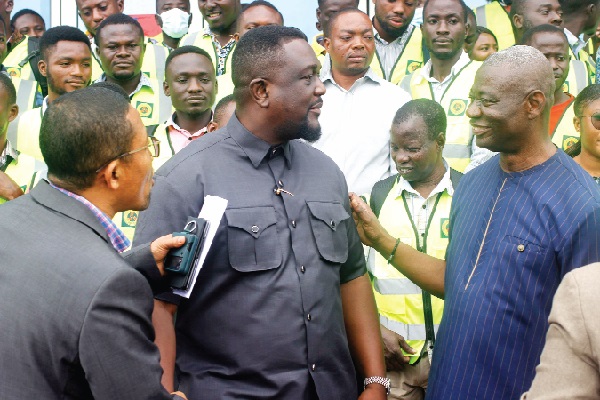 The Electricity Company of Ghana (ECG) has uncovered over 1,000 illegalities carried out by some customers during the first week of meter auditing in Accra.

This is in spite of the six-week grace period the company gave to customers to report anomalies for rectification.

The Managing Director of the ECG, Samuel Dubik Mahama, gave the figures at the launch of the company’s meter auditing and visibility programme in Accra yesterday.

“In just the first week of the exercise, we identified more than 1,000 places with illegal connections and most of them have been surcharged,” he indicated at the launch at the Legon District of the company.

The auditing exercise has seen the official deployment of ECG personnel across the country to audit the meters of customers as part of efforts to protect revenue losses.

It is taking place simultaneously across the country and is aimed at checking the integrity of meters to know whether they are performing well or not.

Also, it will help the ECG effectively account for the power it supplies to its consumers and, in doing so, cut losses and make the business more profitable.

The exercise will be a sustained campaign and will see officials visiting every home, area and community in the country.

Those found to have done illegal connections will be invited to the offices of the power supplier to get them to rectify the illegality and also pay the surcharge.

If after 48 hours the offenders refuse to respond to the ECG’s request, they will be prosecuted.

Mr Mahama explained that the action would help the ECG recover its funds for power supplied and intended to use all legal means to get power consumers to pay for what they consumed.

“Whatever power we put out, we should be able to get our money back. Currently, we are not doing that. We have reached out to those who have been identified to pay the surcharge.

“For those who have decided not to come and pay, we are about to start prosecutions,” he announced.

He said there was a lot going on out there that needed to be fished out in order to save the company from revenue losses.

“We need to find all these things out and get the people of Ghana to start paying electricity bills so that the ECG can grow,” he stressed.

Mr Mahama said the ECG had the right to prosecute any person who engaged in power theft and, therefore, persons who engaged in such acts should put a stop to them before they were found out.

The ECG MD charged the teams deployed to be professional in their dealings with customers, and that they should keep their calm whenever they were provoked and file the necessary reports so that action would be taken.

He advised them to announce their presence and make their identification cards visible, since the company did not want any unscrupulous persons, such as criminals, to take advantage of the exercise by getting into people’s homes.

Moreover, he said, they should be courteous whenever they were entering the homes of customers, since that was key to building a good relationship with them.

“You are not there to quarrel with anybody or fight with anybody. Remember, you are the face of the ECG now,” he told the teams.

The Accra East Regional Manager of the ECG, Bismark Otoo, said the Legon District served the elite group in society and, therefore, had high expectations of the ECG with regard to customer service delivery.

“The focus of our gathering today is to improve our revenue mobilisation. As revenue is the life blood of every organisation, it is necessary for the ECG to find ways of revamping its revenue collection.

“Despite the constraints, the Legon District contributes GH¢6,689,770.04 weekly to the revenue basket of the ECG and I am hopeful that with the launch of this programme here, the district’s revenue will increase tremendously within the shortest possible time,” he said.

In a related development, the ECG yesterday disconnected an events and entertainment centre at East Legon for the illegal use of power.

The facility was disconnected for meter bypassing.

The ECG Manager in charge of Revenue Protection and Technical Investigations, Ishmael Tetteh Oku, said aside from the meter bypass, the meter was meant for domestic use and not for commercial purposes.

He told the media that although the facility was not on full load at the time of the disconnection, a rough estimate put the monthly consumption at over GH¢400,000.

“They have bypassed our meter and so whatever is consumed here is not paid for. This is purely an illegal connection, which is a criminal case. Looking at the figures now, we are looking at over GH¢400,000,” he said.