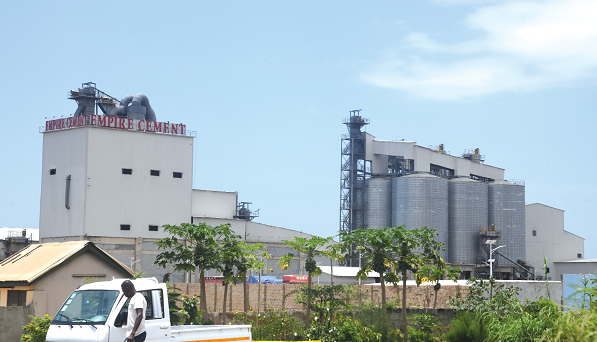 The traditional authorities and residents of Weija, Gbawe and Tetegu in the Greater Accra Region have called for the full operationalisation of Empire Cement Ghana Limited, a new $35-million cement factory located in the area.

Even though work on the project, a private investment, was completed about four months ago, its operationalisation has been held back because of the lack of a permit from the Environmental Protection Agency (EPA).

That prompted the chiefs and the residents to hold a news conference last Thursday, at which they appealed to the authorities to consider removing any operational barriers, since the project held enormous potential for the Weija-Gbawe Constituency in particular and the larger Ghanaian economy.

The President of the United Residents Association of South West McCarthy Hills, Kwaku Danso, who addressed the press, said when the factory became fully functional, it would create hundreds of direct and indirect jobs for the unemployed youth in the Weija-Gbawe Constituency and beyond.

Empire Cement, he said, would also provide affordable cement for the developmental needs of the country.

Mr Danso said the factory had demonstrated that the technology being used would generate no dust and, therefore, there would be no health or environmental hazard.

“As residents of the area where the factory is situated, we know that Empire Cement’s technology and the methodology adopted will address all environmental concerns,” he said.

“This appeal is necessitated by the fact that $35 million has been injected into the economy by the company and it is important that the investment does not go down the drain, as that will serve as a disincentive to prospective investors, both local and foreign,” Mr Danso said.

He said the sod-cutting ceremony for Empire Cement was held on June 11, 2020, after the company had secured permits from the EPA and the municipal assembly.

The ceremony, he said, was led by the then Greater Accra Regional Minister, Ishmael Ashitey; the Member of Parliament (MP) for Weija-Gbawe, Tina Mensah; the Municipal Chief Executive, Patrick Kwesi Kumor, as well as the chiefs and the assembly members of the area.

“The ceremony was a public event and it was reported by the national newspapers as a cement manufacturing company. The company was registered at the Registrar-General’s Department for the sole purpose of manufacturing and bagging cement, and subsequently registered with the Ghana Investment Promotion Centre and the 1D1F Secretariat at the Ministry of Trade and Industry,” he said.

“Empire Cement has not been registered anywhere for the manufacture of cement paper and these facts can be verified from the Registrar-General’s Department. The company is not also equipped with the facilities to manufacture cement paper.

“We reiterate our support for the factory to be operational due to its superior technology, environmental friendliness, as well as the job opportunities that it is bringing on board, and disassociate ourselves from the activities of some individuals,” he added.

Mr Danso said Empire Cement took great pain to invest huge sums of money in developing a robust system to deal with perceived adverse environmental concerns raised by some stakeholders in the matter.

“Aside from the high technology and eco-friendly machinery, the factory has gone a step further to install water sprinkles in all corners of the wall, as well as planted trees, to avoid any fugitive dust that may escape,” he said.