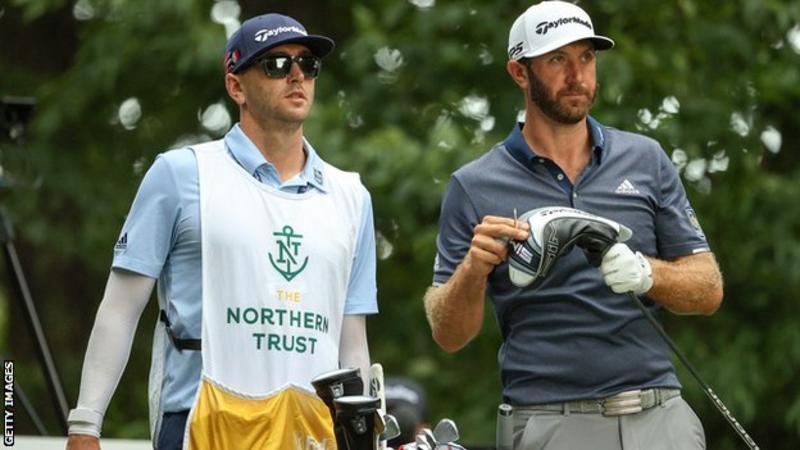 Dustin Johnson produced a sensational final-hole eagle to establish a commanding five-shot lead heading into the final day of the Northern Trust.

The world number four capped a fine round by curling home a superb 40-foot putt on the 18th at TPC Boston.

It saw the 36-year-old follow up Friday’s 60 with a seven-under third-round 64 also featuring six birdies.

“I’m going to have to go out and shoot a really low round if I want to win,” Johnson said.

“It was good. I played solid all around. I gave myself a lot of opportunities and I’m in a good position.”

Johnson sits on 22 under, five ahead of fellow Americans Harris English, who shot five under, and Scottie Scheffler.

It is the largest 54-hole lead on the PGA Tour this season.

Scheffler’s 59 on Friday made him just the 12th player to shoot under 60 on the PGA Tour.

In his third round, he shot a four-under 67 including a birdie on the 18th, but he lost ground on overnight leader Johnson.

Tyrrell Hatton is the best-placed British player, with the English world number 14 sitting 10 shots behind Johnson despite an excellent eight-under 63.

Spanish world number one Jon Rahm is on 10 under.

Johnson will return to world number one with a win if Rahm and US world number two Justin Thomas – who is on seven under – finish worse than a three-way share of second.

The Northern Trust, in Norton, Massachusetts, is the first of three events in the US circuit’s FedEx Cup play-offs that will determine the PGA Tour champion for this season.

Woods and McIlroy off the boil

While Johnson continued his terrific form, Tiger Woods and Rory McIlroy both struggled in Saturday’s third round.

The top 70 players in season points will advance to next week’s BMW Championship, which will decide the 30 players to compete in next month’s season-ending Tour Championship at East Lake in Atlanta.

Both McIlroy, who began the week eighth on points, and Woods, at 49th, stand to fall after poor showings in Boston.

Race and golf: Four BAME golfers discuss their experiences in the sport