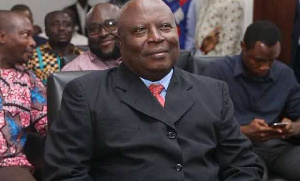 Special Prosecutor Martin Amidu says his Office “never started investigations into the ‘contracts for sale’ allegations” levelled against Adjenim Boateng Adjei, former CEO of the Public Procurement Authority (PPA) because his staff investigators have been compromised.

This, he said, explains why Manasseh Azure Awuni, the investigative journalist, has still not been invited to make a witness statement.

Manasseh Azure Awuni, in a documentary accused the ex CEO of the PPA of establishing a company known as Talent Discovery Limited (TDL), which was used in securing government contracts via restrictive tendering and selling those contracts to others for profit.

In a statement issued on the Office of the Special Prosecutor website on Sunday, Martin Amidu gave an update on the referral of allegations of corruption against Adjenim Boateng Adjei to his office.

Amidu explained that he had arranged with the Auditor-General (A-G) to review bank statements of Adjenim Boateng Adjei for the period 01/01/2017 to 31/08/2019. The review was done and later forwarded to the Office of the Special Prosecutor (OSP) for further action.

Through this arrangement, auditors from the A-G’s office were to assist investigators from the OSP to understand the review of Adjenim Boateng Adjei’s bank statements. The review will then be passed on to the Acting Head of Investigations for further action.

“The staff of the Audit Service who reviewed the bank statements of Mr Adjei after their first meeting with the Acting Head of Investigation and the case officer would not come back to assist the investigations. When I pressed the matter of the reluctance of the staff of the Audit Service to assist the further investigation of the case, the Auditor-General informed me that his staff had reported to him that they could not work with my investigators on the case. I conveyed the information to the investigators and wanted to know what the problem had been, they said they did not know of any problem,” parts of the OSP’s statement said.

Martin Amidu observed that from the behaviour and manner the investigations were being conducted, it appeared that the investigators of the OSP, who were staff on secondment, were compromised because the “Acting Head of Investigations and the case officer used less than one hour to search the premises of Talent Discovery Limited (TDL), Mr Adjei’s residence and Mr Francis Arhin’s residence and literally found no material exhibits”.

Amidu disclosed that the intelligence he gathered revealed that one of his investigators was in constant communication with one of the lawyers of the suspects.

After persistent calls on the Auditor-General to be candid with him and tell him all that he should know about the collaboration between his office and the OSP, the Auditor-General reported to Martin Amidu that, “his staff reported to him that when they first met with my [Amidu] staff, they were told by my seconded staff investigators that the case was so good that each of them could benefit from it.”

He continued: “I confronted the Acting Head of Investigation with the facts but he flatly denied them. But the same scenario was playing in other cases such as three very serious on-going investigations at the National Lotteries Authority, for suspected commission of corruption and corruption-related offences.

Most on-going investigations were being unduly delayed for no apparent reasons in spite of constant reminders from the Special Prosecutor. The resolution of the Adjenim Boateng Adjei case was taking too long to investigate because my seconded staff investigators appeared compromised.”

Martin Amidu has therefore ordered that all on-going investigations in all cases, except those affecting pending cases in court be suspended.